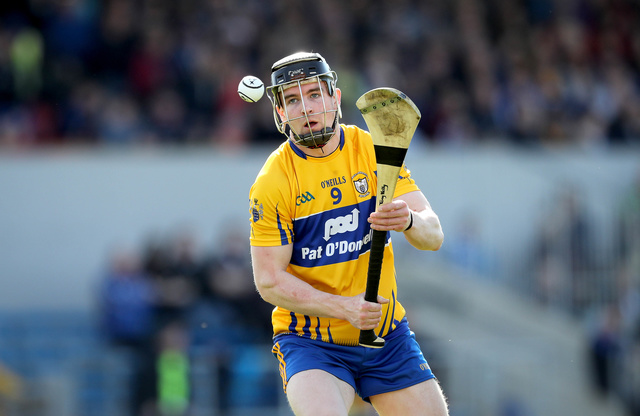 Clare’s talisman Tony Kelly is targeting a return to action within the coming weeks. The Ballyea clubman is recuperating from ankle surgery he underwent last October. He missed his club’s county final win over Inagh-Kilnamona and the opening games of Clare’s league campaign.
The three time All-Star admitted that his rehab has been going well and is hopeful he’ll return to competitive action soon. He said: “I’ve about 17 weeks done at the minute so just back in, I’ve a good block of running done, so I’ll be back in hurling this week. It’s all going to plan so far. I just have to ramp up the hurling, shake off the rustiness, and hopefully I’ll be back on the field pretty soon.
“I think we’re off this weekend so I’ll play it week by week and see how I get on this week and next week and then we’ll see how it’s progressing. But it’s going well at the minute.”
Kelly had to undergo reconstruction on the inside and outside of the ankle. For him it’s now a case of seeing if his ankle can hold up to the challenges of playing top inter-county hurling. He said: “In terms of the severity of it, I’ll be able to play and I’m back running and I’ve had no real setback with it. So, in terms of severity, I’d say it’s like any operation that you do, once you can get back on the field and you’re not hampered or reduced in any way, shape, or form, then it should be okay. It feels fine, it feels strong, I’ve a good block of rehab done with it. I’m hoping that’ll be the end of it and the ankle will see me out now.
“I’m hoping that I might actually have a bit more flexibility with it. So, yeah, they’ve told me that once the rehab goes to plan you should be back to full strength and back to normal so from that standpoint it’s going well.”