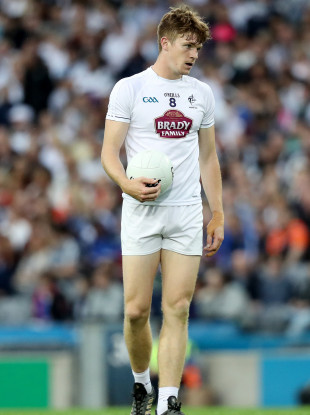 Kildare travelled to Pairc O’Caiomh and came away with a first win of their division two campaign. The Lilywhites led at the break and maintained that push until the end on a very difficult surface that continually cut up throughout.

In the first half, Cork defended well for the most part but were let down up front as they registered seven wides, that said they had led twice but  Kildare’s penalty, awarded for a Ronan O’Toole foul on Jimmy Hyland, allowed Kevin Feely the chance to put the visitors in front and they never trailed from there.

The sending off of Kildare midfielder Fergal Conway after receiving a black card following a first half booking could have opened the door for Cork but they couldn’t get in front. Sean White and Mark Collins points had closed the gap in the latter stages but the goal Cork needed remained elusive.

Kildare actually finished with 13 as Keith Cribbin was black-carded near the end, Cork fell short of their full complement as sub Brian Hurley was dismissed for an off-the ball incident