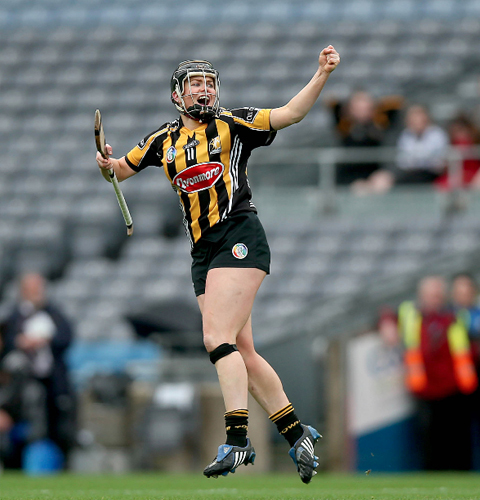 Ann Downey got the response she had hoped for, from her charges after last week’s draw at home to Clare, with a 5 point victory over Galway in Athenry’s Kenny Park on Saturday. The result means that Kilkenny are at least guaranteed a quarterfinal spot as they head into their last group game against Dublin on the 22ndJuly.

For Galway it was their first real test of their championship so far as they had enjoyed 2 comfortable wins over Dublin and Waterford in their opening group games. Manager Mark Dunne knows he side have a lot of work to do if they are to be serious All-Ireland contenders come September. They struggled for large periods of the game to break down the Kilkenny defence and could only register 8 points in 60 minutes of play before a Rebecca Hennelly converted penalty reduced the gap to 5 points in injury time.

In a low scoring tense opening half supporters had to wait 24 minutes for the opening score of the game from play when Anne Dalton who operated as a sweeper burst out of defence and shot a great score from the half way line. Galway who were playing with the aid of a stiff breeze responded with 3 points on the trot from Noreen Coen and Niamh Kilkenny to give them the lead at the break 4 points to 3. Kilkenny got the second half off to a flying start with 3 points two coming from the influential Katie Power who finished with 3 points in total.

With 54 minutes gone the game was still in the melting pot with Kilkenny slightly ahead 9 points to 7. However  a defensive error from the homeside allowed Shelly Farrell to attack right through the Galway defence and she found substitute Michelle Quilty who hand passed the ball to the back of the net. Both teams exchanged points before Shelly Farrell once again responded quickest to another Galway error and this time she goaled to put the score at 2-10 to 8 points.

There was still time for one more Galway attack which resulted in a penalty with Hennelly making the trek up from centre back to convert. Player of the match Anne Dalton was excellent throughout and has really mastered her sweeper role playing just in front of her full back line where she along with the half back line was the launching pad for the Kilkenny attack. Up front the Kilkenny attack were ruthless in particular Shelly Farrell who took every opportunity that came her way and made Galway pay for some poor defensive errors.

In 2 weeks time Kilkenny take on Dublin while Galway travel to Clare in the final group 1 games with all 4 teams vying for the top 3 spots.

Camogie: Thompson the star as Cork make it 4 from 4...