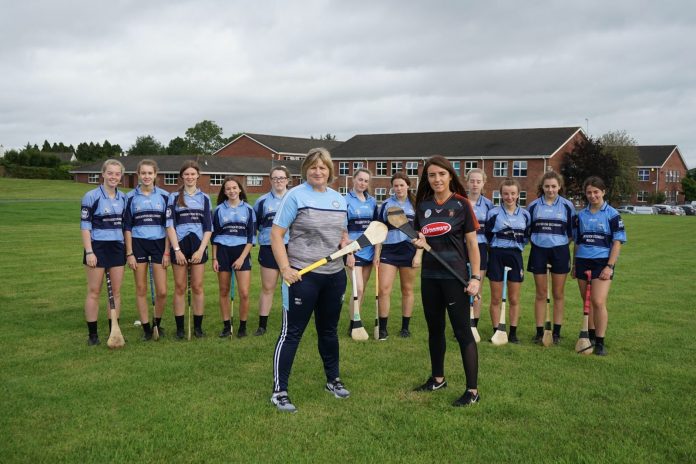 It is fair to say that Mary O’Connell has experienced a lot as a camogie player in such a short space of time. The Clara native missed out on her side’s All-Ireland win back in 2016 due to her travels to the US. However, she was more determined to finally get in on the act and proved a catalyst behind the Cats 1-14 to 1-11 victory over the Tribeswomen of Galway in last year’s final. The 24-year-old secondary school teacher hails from a very sporting background. She said: “I grew up in Clara in County Kilkenny. Anybody that knows Clara knows that there is only a church and a GAA field on the main road. I would describe the pitch as the focal point of the community. It is where we spent most of our spare time in the evenings and weekends. It was the done thing to get involved in camogie and hurling in the area. It is where you made your friends. I have two brothers and a sister. They had a huge involvement with the GAA too. If I wasn’t out playing in the field with my friends I would be at home messing with them pucking about. I suppose that is where my love of camogie stemmed from. I went to primary school in Clara and the teacher at the time Richie Mulrooney was a prominent figure in Kilkenny hurling. He would have trained teams for years. That passion he instilled in me I suppose. My parents loved going to our matches. So I guess camogie was in every aspect of my childhood.”

O’Connell is well known for her hard graft and determination within the Kilkenny panel. In her early years, she strived to be the best she could be and reach for success. She said: “Well I suppose I was lucky in that our school teams were in Roinn A in both hurling and camogie. You would have gone to your older brothers’ games and thought to yourself I want to be like them. I suppose growing up, Kilkenny were very successful in senior camogie and hurling and I don’t think I ever missed a game. Those great Kilkenny teams were my idols and those are great role models to inspire you to want to work hard and be successful. I always wanted to play county from a young age and be as successful as other players I suppose. One memory that springs to mind was going to training on Saturday mornings and pulling on anything before me.”

Mary remembers putting on the Kilkenny jersey for the first time like it was yesterday. It was something she never took for granted. “I played county U14 first and was a sub on the team. When I got to UI16 level I was starting centre-back. Paddy Kelly was our manager at the time. He would have given me great confidence and believed in me. That is something I took with me. All my club managers were also instrumental in my development as a camogie player. Paddy is one man that stands out to me, however. He text me after the senior All-Ireland win last year and if it wasn’t for him I wouldn’t have been the player I am. He shaped me as a player. He gave me great belief. My journey with the senior team has been quite an unusual one to date. We won the Minor All-Ireland back in 2013. We beat Cork that year. I got called in with a club mate of mine. I was only 17 at the time, in 5th year. I would have trained with them and been on the panel for a few years. In 2016 I decided to go on my J1. So I missed out on that All-Ireland success. I was delighted for the girls, but part of me was disappointed that I missed out. To be honest I don’t regret going abroad. It is just one of those things I suppose. I was off the panel for a while. I was still playing club and then I got a call to go back into the panel. For a while, I wasn’t sure if I was capable of getting back to that standard, but once I finished college got a job and routine I got myself back fitness-wise. And I am so glad that I did. My first proper game for Kilkenny was in the league this year against Waterford. I remember being properly nervous. I hadn’t started a game for Kilkenny before so there was pressure on me I felt. I remember getting taken off at half time but lucky enough I didn’t get that nervous again.”

Being in a squad that is so driven, the Kilkenny side is full of characters. O’Connell admitted: “Absolutely. The likes of Denise Gaule and Katie Nolan are great characters in the dressing room. I love a laugh. You would be serious when you have to be, but it is nice to be a bit more relaxed and have the craic when you can. One story that springs to mind was last year. We would have had to get covid tests done. There was a strange-looking thermometer and some of the girls claimed it was a body fat test. We got a great laugh out of that.” The season last year was different in that Covid 19 caused testing to be done on GAA players. O’Connell believes it was something she and her teammates took in their stride. “Well look we were happy to just be playing at all. You got your tests done and sanitized and filled out your return to play. I suppose it was a successful year for us as a team, so we just adapted and moved on,” she said.

From a personal viewpoint, O’Connell was delighted to finally claim that All-Ireland crown last December. Her feelings towards it are mixed in some ways. She said: “Winning your first All-Ireland was special. That feeling hasn’t left me to this day. It is a shame that my family wasn’t able to attend, however. That was hard. To have gone through a big moment like that and not have them there was tough. I got loads of messages of support so I knew they were there. Your parents are proud of you and you know that. It was an amazing experience and something I will look back on fondly in years to come. I was just overcome with emotion. It is still sinking in that we got over the line.”

O’Connell is strongly in favour of the Camogie Association going under the one umbrella with the GAA and Ladies Football. She said: “100 per cent. I strongly believe it would benefit camogie massively. Pitches wouldn’t be an issue in that sense and the coverage and promotion of the game would grow. Playing camogie games before hurling games would be an idea. It is something that the associations need to look at.” Having played ladies football and volleyball in her secondary school days, O’Connell revealed her toughest opponents have been on the camogie field. “Sarah Dervan of Galway is a tough opponent. She is incredible. There is also a player I came up against in Down called Niamh Mallon. She is fantastic. I wouldn’t mind signing her up for Kilkenny. She has everything.”

Mary O’Connell is a fairly realistic person both on and off the field of play. At 24 years of age, she has plenty more to offer this team. “If I could look ahead to 10 years from now I would like to look back and say I have as few regrets as possible. The enjoyment for me is as important as winning.”