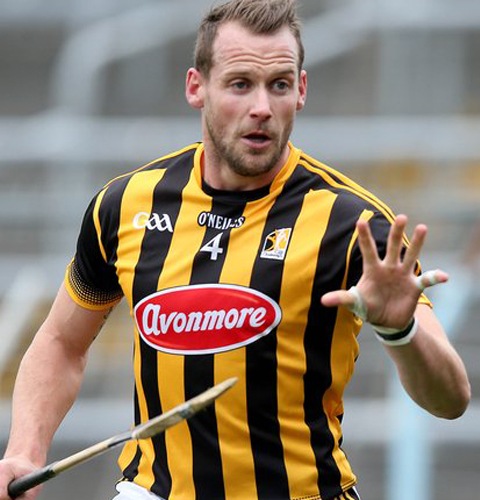 Describe your career in one word…

Did you always think you would play Senior hurling for Kilkenny?

No, I wasn’t that talented under-age and always had doubts about my ability

Which All Ireland final stands out for you?

Have you any regrets from your inter county career?

You mentioned Brother Damien in your retirement statement, how was he such an influence on you?

Shaped me to be the man I am today

How difficult was it to break onto the starting 15? When did you feel you were an established team member?

Yes extremely hard as the panel was very competitive. In 2007 after I won my first All Star

What were the celebrations like after winning an All Ireland? Any good/funny stories?

Amazing feeling and a great week. Ger Aylward drinking Jaeger bombs out of his shoe!!!

What was a normal weekly routine for Jackie Tyrell in mid-Summer around championship time?

Did you enjoy playing corner back?

Hated it at the start, but soon found out that it was there or nowhere, so learned to love it

What advice would you give a young player about to join the Kilkenny Senior panel for the first time?

Relish the challenge and don’t have making the team being your ultimate goal, getting the best from yourself should be your target and see where that takes you!!

Did you feel pressure as an inter county hurler?

Yes, and especially in my earlier days when I wasn’t playing as well and consistent enough to be a regular starter

What do you think was your best display in a Kilkenny jersey?

2014 All Ireland Replay, I was never as ready for a game

Extremely hard, he just needs half a chance to score, so concentration needed to be at a high level for the full game

Have you any plans now you are retired?

Yes, winning the club football All Ireland with the Village (watch out Diarmuid Connolly & Mossy) What do you think you will miss the most about being an inter county hurler?

Did you study your opponents before games? Did you visualise the game beforehand?

Yes I study them closely, positions they take up, which hand they shoot with and movement patterns

It was great, very hard medal to win. Davy was nuts.

What is Brian Cody like? Did ye have many chats?

He is a very fair, ambitious man and if you don’t meet that ambition you will not be there that long!! Chats, very short and to the point

Best after match celebrations: In a car with Paul Murphy, Richie Power, Paddy Hogan from Kilkenny to Dublin with a bottle of vodka and a box of fags (no mixer)

Laziest team-mates you hurled with: Richie Power (never ever did 1 pre-season)

Guilty pleasure: Westlife (Tommy Walsh and I loved doing a duet of flying without wings in Karaoke)!!! Fav songs before a match: Eminem -Til I Collapse, Kasabien – Fire

Worst fashion mistake: Not cutting my hair for 7 months in 2010 Banner Edge out Premier in thriller in Ennis