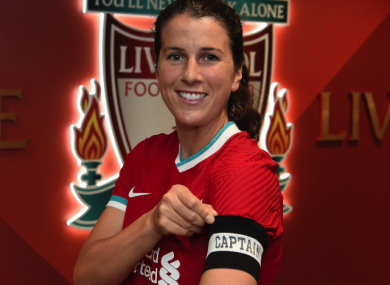 Liverpool manager Jurgen Klopp paid tribute to the Liverpool Women’s team after they claimed the Championship title on Sunday. The Reds make a return to the FA Women’s Super League after a two year exile.
Republic of Ireland international Ruth Fahey captained the Reds, was on the scoresheet in their 4-2 win over Bristol City and was named Player of the Match. Other Irish Internationals at the club are Leanne Kiernan and Megan Campbell.
A record crowd of 5,752 saw Liverpool claim the championship title and Klopp was quick to congratulate them. He said: “Congratulations – I sent messages yesterday, I was really happy. I was following it all the time. After the result last week it was clear they needed a draw against Bristol to make it and they won. I’m really happy for the girls and for Matt (Beard) – it is a big, big thing.
He added: “Obviously, Liverpool was in the last years not famous for treating or dealing with women’s football outstandingly well. They didn’t go down to the Championship for no reason.