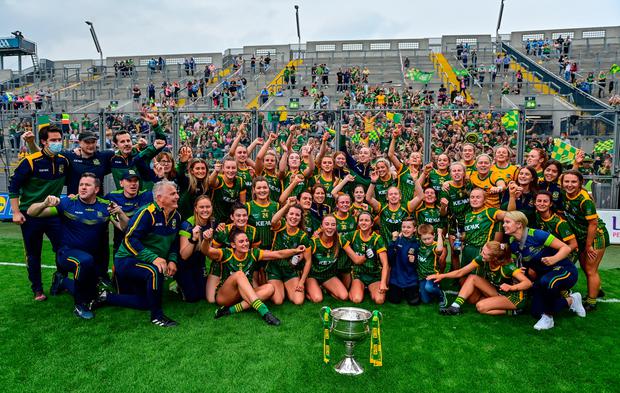 The TG4 Ladies Senior Championship gets underway this weekend. To coincide with the start of the championship Sportstalk’s popular podcast Sportsgirls returns for another year.
In Group A last year’s beaten All-Ireland finalists Dublin welcome Cavan to the Clann Mhuire Grounds in the Naul. Mick Bohan’s side claimed the Leinster title a few weeks ago and will be out to regain the Brendan Martin Cup.
After losing to Meath in the group stages of the Leinster Championship, Dublin gained their revenge in the final by winning on a scoreline of 1-7 to 1-5; Hannah Tyrrell’s second half penalty the difference.
Cavan retained their senior championship last year with an extra-time win over Tyrone in the relegation play-off semi-final. The Breffni County lost to Donegal in this year’s Ulster semi-final. The game throws in at 2pm.
Also in Group A Mayo take on Tipperary at Hastings Insurance MacHale Park in Castlebar. Mayo lost out to Galway in the Connacht Final. They got to the Division 1 semi-final earlier this year but lost to eventual winners Meath.
Tipperary fell to Kerry in the Munster semi-final. They defeated Tyrone in the championship relegation final last year to retain their status for this year. They are without a number of their big players which is a huge blow for them.
In Group B Monaghan welcome All-Ireland and Division 1 champions Meath to Drumhowan. The Farney County fell to a heavy defeat in the Ulster semi-final to eventual winners Armagh. Earlier this year they got to the Division 2 semi-final.
All-Ireland champions Meath missed out on adding the 2022 Leinster title to their 2022 Division 1 title when they were defeated by rivals Dublin in the final. In what was a huge blow to the Royals they had influential Vikki Wall harshly sent-off.
Beaten Munster finalists Kerry take on Connacht champions Galway in St. Brendan’s Park in Birr in Group C. The Kingdom lost to Cork by five points in the provincial final a few weeks ago. They claimed the Division 2 title earlier this year with victory over Armagh.
Galway claimed the Connacht title for the fourth time in a row when they defeated Mayo by four points. They lost to Mayo in the All-Ireland quarter-final last year and will want to improve on that.
Waterford and Donegal face each other in Group D in St. Brendan’s Park in Birr. Donegal were defeated by Armagh in the Ulster Final, after extra-time. They reached the Division 1 final this year but were narrowly beaten by Meath.
Waterford lost to Cork in the Munster semi-final. They retained their Division 1 status this year by defeating Westmeath in the relegation final.