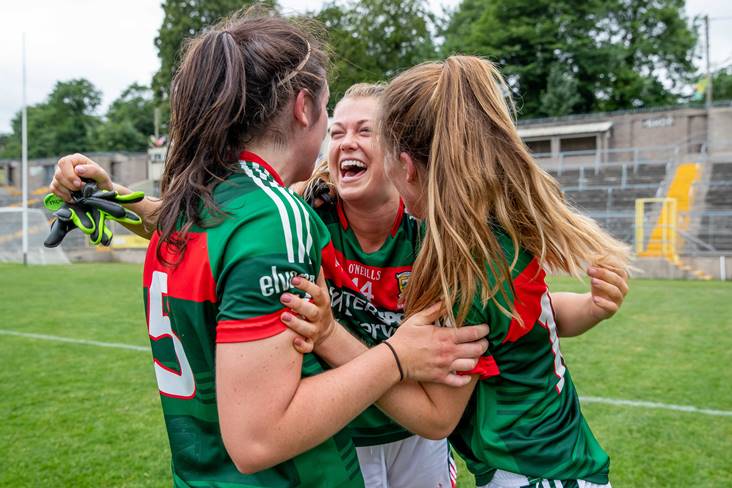 Full-forward Sarah Houlihan fired in 2-3 as the kingdom responded to their Munster final performance with a great win in Nenagh.
Tipperary lost the influential Jennifer Grant before throw-in but started well as Aisling McCarthy kicked the first score after only 45 seconds. Two scores from Louise Ni Mhuircheartaigh helped Kerry move into a 0-4 to 0-1 lead before Tipp responded with a goal in the 21st minute from Roisin Howard to move 1-3 to 0-4 ahead. A late flurry of scores before the break would prove crucial as Kerry drew level before goals from Houlihan and Andrea Murphy put them 2-9 to 1-3 ahead at half-time.
After the break, Aisling Moloney fired in a goal for the hosts as they reduced the deficit to 4 points with 20 minutes to play. Only minutes later Houlihan scored her 2nd goal to put Kerry back in control, but Tipp never gave up and despite the defeat can be pleased with their performance.

A goal from Blaithin Mackin rescued a point for Armagh, although they missed a last minute free to snatch a win in Clones.
The loss of star forward Aimee Mackin before throw-in was a blow for the visitors, but her replacement Blathin Mackin deputised well for Armagh. After an even opening perio, a goal late in the 1st half from Rosemary Courtney, after good work from Eimear McAnespie’s and Muireann Atkinson, gave Monaghan a 1-6 to 0-4 lead at the break.
The teams traded scores in the 2nd half before Mackin got the goal her play deserved to help earn Armagh a share of the spoils. Monaghan almost left empty-handed, but thankfully for them Caroline O’Hanlon missed a free with the final kick of the game.

A last minute free from Westmeath’s Leanne Slevin sealed a thrilling 2-12 to 2-11 win over Waterford in Nenagh.
A 1st half goal from Westmeath captain Laura Lee Walsh put Westmeath 5 points in front before a strike from Aileen Wall before the break put Westmeath 1-6 to 1-4 ahead at half-time.
Westmeath started brightly in the 2nd half as a brilliant strike from Aoife Connolly, following a great team move, put them 7 in front. By the 50th minute Waterford were level as Aileen Wall fired in her 2nd goal. Westmeath went in front again before Maria Delahunty’s 6th point made it 2-11 each with 5 minutes to play. It looked like it would finish level but Stephen Maxwell’s side secured a crucial victory through Slevin’s late intervention

Grace Kelly and Sarah Rowe starred for Mayo as despite missing several players following last week’s player walk-out, Peter Leahy’s team put in a brilliant performance to run out 7 point winners in Clones.
Mayo led 1-13 to 2-6 at half-time as the fantastic full-forward line of Niamh Kelly, Rowe and Grace Kelly scored 1-11 between them. Cavan’s Aisling Maguire and Grace Kelly traded goals as Mayo pulled clear before Donna English netted on the stroke of half-time to make it a 4 point game at the interval.
We then had 4 goal in 9 minutes after play resumed. Grace Kelly netted her 2nd goal on 33 minutes before Cavan scored 2 in 4 minutes from Aisling Sheridan and Catherine Dolan. Rowe then finished to the net for the game’s 7th and final goal as Mayo eased to victory as Cavan finished with 13 players following yellow cards for English and Maguire.

Tyrone 5-18 Wicklow 2-06
A hat-trick from Chloe McCaffrey helped the Ulster champions to a comfortable 21 point victory in Clones. Gráinne Rafferty and Gemma Begley added further majors for the red hands with Wicklow’s goals coming from Jackie Kinch and Rose Fagan.

Wexford 3-09 Kildare 1-06
A double from Aisling Murphy and a further effort from Catriona Murray helped Wexford to a 9 point win in Baltinglass.

Louth 3-17 Antrim 1-09
3-7 from Lauren Boyle helped one of this year’s favourites to an opening win at Kilkerley Emmetts-St Malachy’s GAA.

Kilkenny 2-02 London 9-18
London showed why they are on of the contenders for the All-Ireland with a convincing win in Clara.