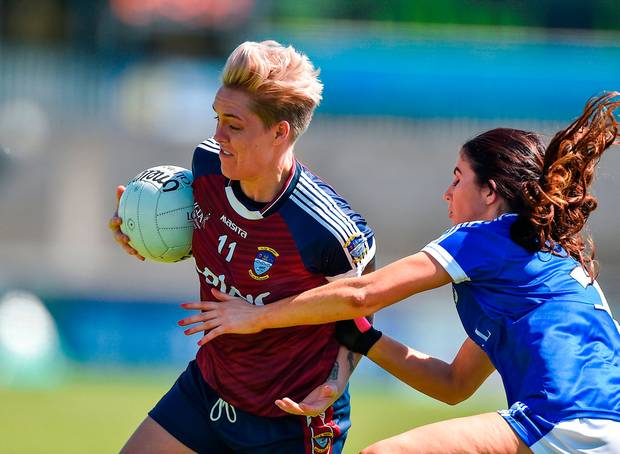 Westmeath easily brushed aside Cavan in Birr on Sunday with a truly breath taking first half of intense, clinical football. It was a surprising result given the sides played out a thrilling draw two weeks earlier, however much of Cavan’s downfall was their inability to win their own kickout. This gave Westmeath a massive platform to build on and with the very stylish Leona Archibald pulling the strings at number 11 Westmeath provided us with a fantastic footballing performance.

Division 1 beckons for Westmeath next year and with a similar display they shouldn’t look a shade out of place. Westmeath took a 13 point advantage in with them at the break, 2-11 to 0-04.

Leona Archibold got three early points, before she scored a nice goal on 20 minutes. It was obvious that Cavan were struggling with the Lakewomens intensity, and heavily guilty of some nasty unforced errors.

On 27 minutes, Westmeath got their second goal courtesy of Laura Brennan, who sliced through the heart of the Breffni defence, before her shot was saved, but she buried the resulting rebound. Score at half time was 2-11 to 0-04 and Cavan needed a massive improvement in the second half.

However, that improvement didn’t look like happening as Westmeath continued their dominance with a 46 minute goal from Ciara Blundell. Westmeath led 3-13 to 0-07. Aisling Doonan tried her best to drag Cavan back into the game but it proved to be in vein as the Lake County ran out easy 13 point winners.

Player of the Match: Leona Archibold, landed 1-06 (0-01f) in a fine performance to match a hairstyle.