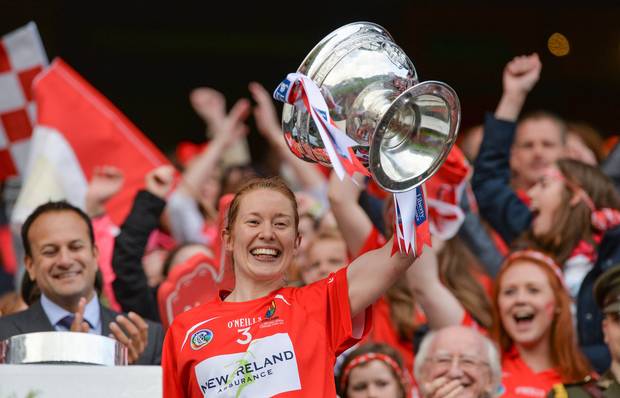 Fav Memory in Sport:
I have two. One is going to Quinns after the 2014 All Ireland ladies football final and re-watching the second half of the match, the atmosphere was electric. The other is scoring the winning goal for Inniscarra to win our first  senior county championship in 2010. I usually never score, so to get a last minute goal to win such an important  match is something I’ll never forget. Some buzz!

Worst Memory in Sport:
The 2012 All Ireland Camogie final, not a good day for the Cork full back line. Fair play to Wexford, they were  super on the day.

One game you would love to replay:
The 2007 All Ireland camogie final. We had a great team and I was one of the people who never got going. Again,
credit to Wexford, they got things spot on that day

What’s the worst thing about Social Media: No time to day dream.

Your least favourite Sport to play or watch:
Formula 1. Anyone who knows the condition of my car knows I have no interest in cars!

3 Celebs you’d bring to dinner:
Michael D for the chats, Michéal Ó Muirchearthaigh for the stories and Sonia O’Sullivan as she is just class.

Where would the dinner be:
The Áras might be handy for Michael D!

What would you feed them:
I imagine Michael D and Michéal would be a meat and two veg men, I’m thinking a stir fry for Sonia.

Favourite Irish Bar:
In college in UCD Flannerys was our favourite spot.

Favourite Restaurant:
No favourite, good to try new places. The last meal out I had was in Baileys in Cashel, the food was beautiful.

The most romantic thing ever done for you:
I’m not going to answer that, too personal!!

3 players you admire from other counties:
In football Sinéad Ahern from Dublin is a consistently classy footballer. Cora Staunton from Mayo is another player who has been top class for decades at this stage!
In camogie Niamh Mulcahy from Limerick is consistently excellent.

Favourite person you follow on Twitter/Instagram:
Twitter I use mostly for following different physios and match results.

training drill you hate (running not counted):
When the forwards are practicing shooting and the backs are put behind the goals!

Teamed named before match day or on match day:
The before for sure.

1 of the fallbacks from being an intercounty player:
You have to miss occasions likes weddings from time to time.

1 of the upsides to being an intercounty player:
The high level of competition at training and games.

What did you eat on the day of a big match:
As I’m getting older I’m eating less on match day. I find rice, veg and a little chicken the best now.

Best Hangover Cure:
A run, food, followed by a nap. Right as rain after!

Most influential person/s in your career so far:
Éamonn Ryan

2 Players you would trade in if there was a transfer market:
Geraldine McLoughlin (Donegal), Niamh Mulcahy (Limerick).

2 Players you would trade out if there was a transfer market:
Not that I would ever dream of it!! In football Deirdre O’Reilly as her versality was huge, she could slot into an position, literally any position. Similarly, Julia White in camogie is hugely versatile so would be a bonus to any team.

Ladies Football and Camogie fixtures 22nd Nov 2020 as junior and...