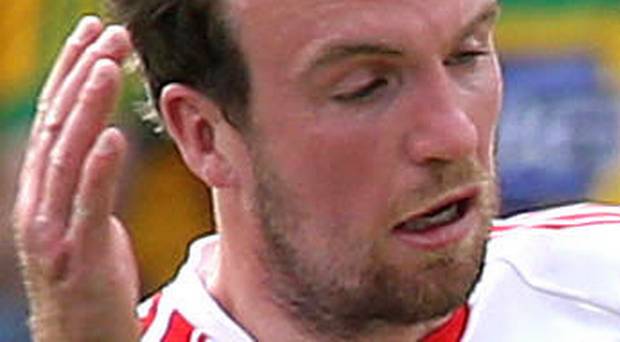 It was heartbreak for Antrim as their second half comeback proved to be in vain at Corrigan Park, and they now have to pick up the pieces ahead of their trip to Wexford next weekend.

Derry were leading by 0-6 points to 0-1 by the short whistle, having playing against a very strong wind and seemed to be in control of the game.

However, the footballing Gods conspired against them in the second half as the wind all but died down. Antrim Manager Lenny Harbinson will be very proud of his team, as they showed great determination and courage to claw their way back into the game.

It was looking like it was going to be a share of the spoils when substitute Owen Mc Keown pointed deep into injury time, but Derry had other ideas as they snatched the win from a Padraig Cassidy fisted point, on the other hand Mc Keown had a chance to level the score with just seconds left on the clock only for his valient effort to be brilliantly blocked by the Derry substitute Michael Mc Evoy.

The game itself had many twists and turns where you just couldn’t call it, Derry had the chance to go three points in front, when they were awarded a penalty bang on seventy minutes, but Padraig Nugent made a brilliant save getting down low to his right to deny Enda Lynn. Antrim will now travel to Wexford who were on the backhand of a trashing at the hands of a brilliant Leitrim display. If Lenny Harbinson men can give a replica of their second half performance, I would expect them to cause an upset.

Man, of the match goes to Paddy Mc Bride of Antrim, his contribution of 1-3 was the spark that instigated Antrim’s comeback.