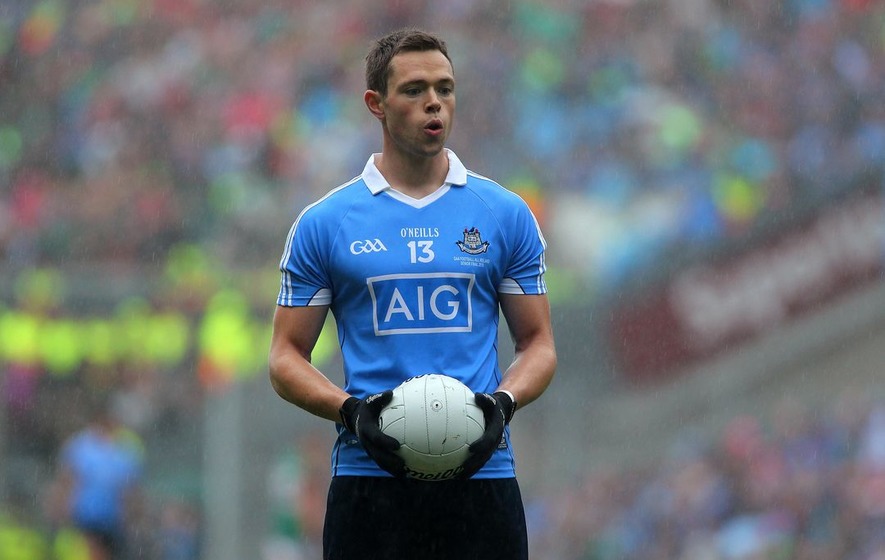 When the great and the good of the Sunday Game football pundits sat down to name the team of the year last week the usual suspects were mentioned. As was to be expected, Dublin and Mayo dominated the affair, with 7 of the All-Ireland winners present in the final 15. But curiously enough, one of the side’s most important members, to this observer’s eyes anyway, was conspicuous by his absence.

Even after the original team had been named Roscommon manager Kevin McStay, who hadn’t been part of the selection process, came in to bat on the behalf of Kieran Donaghy and Jason Doherty before Joe Brolly, finally, popped up to drag the name of the final matchwinner into the equation. Brolly highlighted the astounding free-kick conversion ratio of Dean Rock, who had an astonishing 93% success rate from placed balls over the course of the season, as well as that crucial one in the 7th minute of injury time last Sunday.

It’s been a tumultuous inter-county career for the Ballymun Kickhams man. Initially he was just seen as being an inferior heir apparent to his great father Barney on the Dublin side. After that, the argument was made that he was only present on the side for his free-taking. But he has shown in the last few years, and particularly this one, that there is more to his game than that.

This year  Rock stepped up to the plate in a big way by notching 3-5 from open play in the championship. He got that crucial early goal that set the champions on their way against Kildare in the Leinster final and another important one in the Monaghan quarter-final fixture. But it was perhaps last week when he demonstrated fully how much he has improved by grabbing 4 all-important points from general play in the decider.

His overall total, including frees, was 3-31 in Dublin’s 6 championship games. This compares quite favourably with some of the others who made it on to the team. Looking at the inside line of the Sunday Game team we see another Dub, Paul Mannion present. Mannion had a fine season with a return of 0-16 (2.66 average) from play during the year from 6 games. Paul Geaney notched 1-14 (3.4 average) from play over a total of 5 games. Andy Moran hit 3-24 (3.3 average) over the course of 10 games, in what was his best season in a Mayo shirt.

Con O’Callaghan is deemed as a player of the year contender on the basis of his scoring exploits this year and he did have a fine season, but his total of 2-12 (3 pts per game) from play this year is only four points higher than Rock’s. Now Rock’s scoring exploits may be slightly less than all of those, but he did of course have the other arduous responsibility of all those pressure laden frees on his plate. And no-one outscored him, from play or otherwise, in the most important match of all last Sunday.

It’s interesting to contrast the perception of Rock around the country to another Dublin dead ball specialist: Stephen Cluxton. Now Cluxton is one of the most influential footballers of the modern era and one of the greatest goalkeepers of all time. But the primary reason why he is held in this esteem is not necessarily to do with his saving ability, and more to do with the accuracy of his kick outs. So why do we lionize Cluxton’s ability from a dead ball, and yet take Rock’s for granted? You could argue that it’s a lot more difficult to be 100% accurate off a kick-out tee than it is from a free, and there may be an element of truth in that. But surely the pressure of putting a ball over a bar in the last minute of a game is greater than anything a goalkeeper can face from a restart?

Then again, the difference between perception of Cluxton and Rock is one that is mirrored across the Dublin team. Take for example 2 of their substitutes last Sunday. It was almost deemed a sacrilege by some that Jim Gavin didn’t start the “prodigal son” Diarmuid Connolly for the final. Now Connolly is a class act, no doubt, but given his questionable disciplinary record during his career, it’s no wonder Gavin didn’t want to risk him from the off.

Coming off the bench at the same time as Connolly last week was the unsung hero of Kevin McManamon. McManamon’s style is a little less showy and a bit more, shall we say, bustling, than his more decorated teammate, but in ways he is just, if not more, effective. He has scored goals at crucial stages in the 2011 All-Ireland final (surely the single most important Dublin All-Ireland win of the modern era) the 2013 semi-final, the 2015 semi-final and others. He very nearly netted another screamer in the semi-final against Tyrone. But whereas Connolly is seen as a man who must start at all times, McManamon is only ever viewed as a handy impact sub.

Now you could argue that Connolly had more of an influence when he came off the bench last Sunday, and you’d probably be right. But whereas such a performance by Connolly is used as evidence that he should be starting, if McManamon gave a similar performance, it would be given as further proof that he is more effective off the bench! Every time McManamon does start then, he is usually one of the first to get the curly finger.

All of this however, just illustrates what a blessed position Jim Gavin is in as regards his squad. Imagine being able to leave the likes of Connolly, McManamon, Paul Flynn, Bernard Brogan, Michael Dara Mcauley, Con Costelloe and Niall Scully on the bench for an All-Ireland final and still end up winning? With that level of panel depth, you’d be forgiven for thinking that gaining a spot in the starting line-up, is more onerous a task than winning the All-Ireland medal itself.

Given those circumstances though, we should give extra credit to their 27 year old free-taker. Even despite the fiercest of competition, he still managed to start in every championship match this year. And not just that, in pretty much all of those games he made a significant contribution. So even though the Sunday Game pundits and general populace may disagree on his importance, Dean can take solace in the fact that at least Jim Gavin knows, on this Rock, he can build his church.