First up is former Kilkenny net minder, Dunnamaggin man David Herity. We put a few questions Davids way on the National League, the state of hurling and what blows his hair back in general.

SportsTalk – Who do you think will win Division 1A and 1B?

ST – Who do you think will be top scorer in Division 1 league?

ST – Who do you think will be named player of the Allianz National hurling league?

ST – Who do you think will get relegated from Division 1A?

ST – Give a brief summary of how you see the Division 1A and 1B panning out.

DH -With the introduction of Donal òg to Clare’s back room team I think he will bring the experience and stability to Clare’s management team that has been needed and I see them dominating division 1B with Limerick coming up just short once again.

Kilkenny will be boosted in this years league with the availability of the Ballyhale players.With so many changes in management in Galway,Cork,Tipp etc I see those teams acclimatizing to their new mentors and coming up just short while Kilkennys will get stronger as the league goes on and take the spoils in May.

ST – What did you think about playing in the National Hurling League?

DH – I loved the games especially the the latter ones as the weather improved and the stakes got higher. It was a great opportunity to play against all the teams that normally you would only play once every two/three years in championships.It was great to visit the different grounds as well although that novelty would ware off after spending hours on a bus to the west.

ST – When was your national league debut, who was it against and how did it go for you?

DH – My debut was against Tipp in 2009, Kilkenny were up by 30 points so the pressure was off in once sense but the legs turned to jelly when I got the call as I was having  good craic in the stands. I let in one but made a good save near the end that made the GAA BEO highlights so I was happy out.

ST – Which ground did you least prefer playing in the National League? Explain why.

DH – Probably Walsh Park solely because of the hobbit sized dressing rooms. I love my own personal space pre game.

ST – Which team do you think this League is the most important for? Explain.

DH – Dublin With the changes on the panel through retirements, injuries and those who have left the strength of their panel will be tested. They will hope to mirror last years early league dominance and gain some valuable points that will hopefully keep them clear of the relegation zone.

ST – What’s your best memory from the national hurling league?

DH – Probably 2003 league final. I was brought in as sub goalie the week before hand because of an injury to McGarry. Kilkenny won a thriller against Tpp in Croker 5.17 to 5.16. It was my first senior medal.

ST – If you could sign 3 players from other counties for your team, who would you sign and why?

DH – Tony Kelly,the mans a genius with a hurl,has it all.

Kevin Moran because of his engine ,work rate and leadership skills.

Seamus Callanan because of his ability to get goals and keep the scoreboard ticking over with points. He has dominated the last two seasons and can see him continuing that this year.

ST – What was your least favorite memory from the league?

DH – Losing to Dublin in 2011. I knew we were struggling somewhat with injuries but Dublin destroyed us from start to finish.We could barely keep the ball pucked out to them in the end.

ST – There has been a lot of talk in the media recently about player burnout, a GAA calendar that is unfair on clubs, getting rid of the under 21 competitions, combining the League and Championship to shorten the year for inter-county players etc What are your opinions on all this and what changes would you suggest to the structure of the GAA calendar?

DH – I would get rid of the pre league competitions (Walsh Cup etc) for starters ,bring the league/championship forward by 2/3 weeks and have the All Ireland finished in August. This in turn would mean club players wouldn’t be left to play in the muck and misery of October/November. I think there needs to be a bit of cop on from the managers of different teams. If a player is training on a Monday with a college team midday he shouldn’t have to travel home to be part of senior  /u21training which I heard goes on in some counties. They should work together to make sure that the player is getting the right amount of training along with appropriate rest which nowadays is just as important.

ST – Is the general standard of hurling improving or getting worse?

DH – The general standard of hurler is getting better. They now have the best psychologists, dieticians, physios , strength and conditioning coaches ,statisticians etc working with them and this has made the hurlers stronger ,fitter, faster. Unfortunately too many teams are now coming up with negative tactics to quench the open expansive style hurling and so we don’t get to see the true abilities of the modern day hurler as too often he is been surrounded by 2/3 defenders.

ST – Favourite Movie of all time.

ST – Favourite song to listen to before a game.

ST – Three young players from your club to watch out for

ST – Three things you would bring to a desert island

ST – Medal you most cherish in hurling

ST – What did you love most abut been an intercounty hurler?

DH – Playing with a group of highly motivated players that were willing to do everything they could to be the best.

ST – What did you dislike most about been an intercounty hurler?

DH – Not being able to take a step back from it at times and putting too much pressure on myself.

ST – Laziest team-mate you played with?

ST – If you could be someone else for one day who would you be?

ST – Other sports you have played?

DH – Gaelic Football  and tennis. I wouldn’t rate my ability in any of the others.

ST – Most annoying person on tv?

ST – Three people you would like to go to dinner with?

DH – Oh God; that depends is the juniors will have me back! 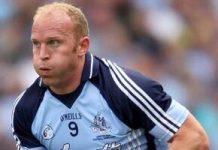