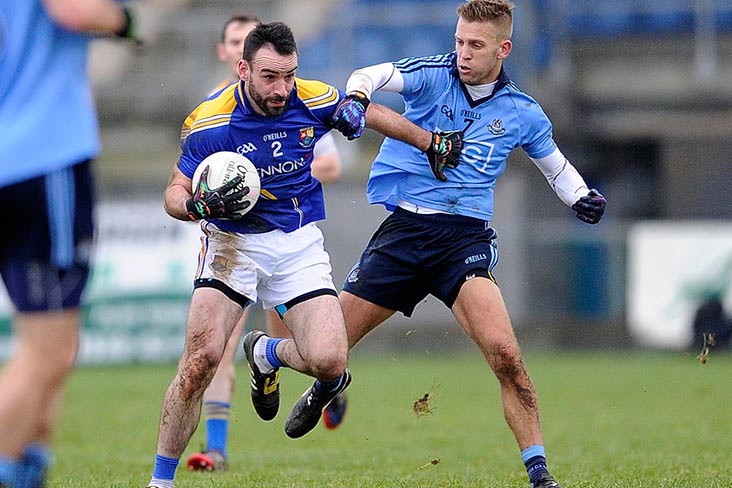 Laois v Carlow
The 1st game of Sunday’s double header will see Laois and Carlow battle it out for a place in the Leinster decider, with both sides confident of victory after their respective quarter-final wins.

Carlow arguably caused the shock of the championship so far when defeating Kildare in the quarter-final for the 1st time since 1953 with a 2-14 to 1-10 win after earlier disposing of Louth. Goals from Daniel St.Ledger and Conor Lawlor helped give Turlough O’Brien’s side a 7 point win against a team that had been playing Division 1 football in the spring. In comparison Carlow were playing Division 4 football and earned promotion, although they were beaten in the decider by Sunday’s oppisition. Manager Turlough O’Brien has a done a fantastic job as manager and is ably assisted by coach Stephen Poacher from Down. The Barrowsiders now have a first final since 1944 on the cards and with players like Paul Broderick and Sean Murphy in great form will be confident of the Carlow rising continuing on Sunday.

Laois have made it through to the final by defeating both Wexford and Westmeath in contrasting circumstances. The opening round win away to Wexford, 2-21 to 1-18 after extra-time, showed the resolve that this Laois team has. Wexford had a 10-point lead (1-10 to 0-3) at the break with Laois failing to score from play in the first-half. However Laois, led by Donie Kingston and Ross Munnelly, produced a brilliant 2nd half and were seconds away from exiting the competition had it not been for Gareth Dillon’s last-gasp point. Kieran Lilis then goaled in extra-time to help John Sugrue’s men to a 6 point win.

In the quarter-final it was much easier for the O’Moore men as they defeated Westmeath by 1o points, 4-13 to 1-12 to earn a first semi-final place since 2009. The brilliant Paul Kingston scored 3-2 to dump the Lake County out as Niall Donoher and goalscorer Evan O’Carroll also impressesd.

Laois won the Divison 4 final meeting earlier this year as well as the round 7 league fixture.  This game should be very tight, with Carlow hoping to make it 3rd time lucky!!!

Dublin v Longford
The 2nd semi-final sees Longford face a daunting task as they take on the Dubs in Croker. Longford have enjoyed a successful season so far as they were very unlucky not to be promoted to Division 2, while last time out they put in a wonderful performance in front of their supporters to beat Meath for the first time since 1982. That 0-16 to 0-14 victory will give Dennis Connerton’s side the belief that they can try and put it up to Dublin. Beating the Royals will no doubt give them confidence but they will need key players such as James McGivney, Darren Gallagaher and goalkeeper Paddy Collum to perform very well if they are to have any chance, in this there 1st semi-final in 30 years.

Dublin demolished Wicklow by 23 points, 4-25 to 1-11 in their opening match with Ciaran Kilkenny, Brian Fenton, Con O’Callaghan and Dean Rock once again showing why they are among the best players in the country. Dublin are looking for their 8th Delaney Cup in a row and their 13th in 14 years, an unbelievable achievement. Dublin will have their eyes set on bigger things but Jim Gavin will only be focused on one thing, getting a win on Sunday.

It would be great to see Longford putting it up to Dublin but with the amount of talented players Jim Gavin has at his disposal, it is hard to see it!!!

Under-20 and minor games to be paused until further notice