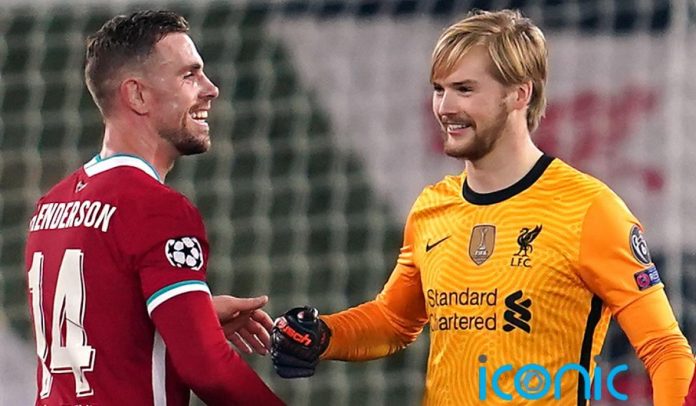 As Caoimhin Kelleher prepares for Liverpool’s Carabao Cup Final against Chelsea tomorrow he has received the backing of his captain Jordan Henderson.
The Corkman has played in every tie for the reds apart from one when manager Jurgen Klopp played first choice keeper Alisson Becker to get him back to fitness after missing games through Covid.
After Kelleher’s exploits in the semi-final second leg against Arsenal, Klopp publicly came out and announced that the Republic of Ireland keeper would be starting at Wembley.
Henderson is fully behind Kelleher. He said: “I think he’s been outstanding. All the games he has come in he’s been outstanding in everything he has done. He’s a fantastic lad, very level-headed and as a keeper: shot-stopping is fantastic, distribution is amazing – and so calm as well.
“He’s learning from the best keeper in the world day in, day out, which will help him. He’s always had that calmness about him, even when he makes big saves he has that calming presence about him which I really like.
“It will be a big moment for him at the weekend but he has to just keep doing what he’s been doing because he’s been fantastic.”
Liverpool’s assistant manager is also a fan of Kelleher; he was there when the Corkman signed for the club. He said: “I was the coach of the under-16s when we signed him so he came into my team. We saw from the start all the things that he shows now on a really high level, he had at that time,” he said.
“I think Caoimhín is a really good example. Him reaching the final shows there is an inside path for all young goalkeepers inside our club. It’s a compliment for the goalkeeper department, of course, to have this trust, for the manager to have this trust.
“But this is what I like. It’s possible for a young goalkeeper in our club to reach a final; with time, with a lot of training, with a lot of games, with a lot of steps. That’s really nice to see.”