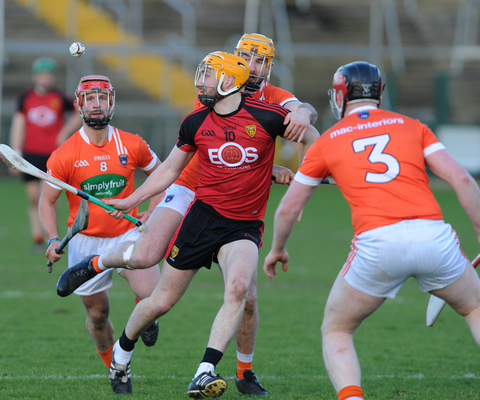 Dual star Chrissy McKaigue failed to skipper Derry to a home victory as London dug deep to finish 1-20 to 1-18 winners in Ballinascreen.

In ideal conditions, Derry opened the scoring, but the visitors held a four-point advantage after 25 minutes

Wind assisted, London finished the half strongly and following a Kevin O’Loughlin penalty goal led by 1-12 to 0-8 at half-time.

Fergus McMahon’s charges came under pressure on the restart, as Derry powered their way back into contention.

A 43rd minute Sé McGuigan goal cut the gap to three points, and Derry continued to work hard.v
The Oak Leafers levelled the tie at 1-15 apiece, after 57 minutes thanks to a McKaigue score.

The Slaughtneil clubman certainly led by example, with Cormac O’Doherty also impressive – his 11th point handing Derry the lead in the closing 10 minutes.

Derry led by 1-18 to 1-17 after 68 minutes, but London finished strongly to clinch victory with three unanswered scores.

G2 Down v Armagh, 3pm – Ballycran
Down 6-21 Armagh 0-11
Down led for the most part against an Armagh side which finished with 13 men in Ballycran.

Nathan Curry cancelled out an early Down point after converting a free, but this was the only time the sides were level, as Down drove on.

Daithi Sands bagged a hat-trick for the Mourne County, who led by 3-15 to 0-5 at half-time.

Armagh tried hard, with Down keeper Fintan Woods pulling off a fine save before Davy McCreesh got in for a point.

Stephen Renaghan was also on target for Armagh in the opening half, but the visitors had a lot to do.

Down’s fourth goal opened up a 23-point advantage, with Down added back-to-back goals late on, on the way to a 28-point win.

Seamus Murphy’s charges fired 14 wides over the contest, but also took some impressive scores throughout, and withstood a late Mayo rally to finish with six points to spare at the full-time whistle.

The hosts signalled their early intent when George O’Brien got them off the mark after just 25 seconds, but eight minutes later the sides were tied at 0-2 apiece, following Kenny Feeney’s second score for Mayo.

The visitors relied hugely on the contribution of the Tooreen clubman from placed balls, and he finished this game with nine points – eight from frees.

Wicklow regained the lead thanks to Christy Moorehouse in the 11th minute, and they wouldn’t trail for the remainder of the game.

The Garden County held Mayo scoreless for 18 minutes, as they moved 0-9 to 0-2 ahead with five of their six starting forwards on target.

Wicklow moved 10 points clear following a point from close to the sideline from the ever impressive Michael Lee, however Mayo rallied.

The Westerners scored 1-2 unanswered before the break, including a Corey Scahill goal, but Wicklow led 0-13 to 1-5 at half-time.

Feeney broke Mayo’s scoring duck, before substitute Sean Germaine, who was just three minutes on the pitch netted for Wicklow.

Wicklow opened up a 1-20 to to 1-8 lead following O’Brien’s eighth point, but were held scoreless as Mayo worked hard.

Feeney added points from play and a free before an Eanna Ryan goal, however Wicklow had too much in reserve.

Martin Fitzgerald scored both of Kildare’s first half goals, as they led 2-12 to 0-6 at the break, with Fitzgerald completing his hat-trick on the restart, and Shane Ryan adding a fourth goal.

Kildare totally outclassed their opponents in this game, and led by 0-2 to 0-0, before Fitzgerald fired his first goal in the sixth minute.

Roscommon only managed two points in the opening 16 minutes, as Kildare continued to look good.

To their credit, the visitors rallied in the second quarter, and cut the gap to five points on a 1-7 to 0-5 score-line, after 27 minutes.

However, Kildare upped their game before the break, with another Fitzgerald goal pushing their 12 points clear at the interval.

The Lilywhites completed their hat-trick inside two minutes of the restart, and after 46 minutes found their fourth goal.

This helped the hosts to a 4-15 to 0-6 lead, and although Roscommon bagged a goal in the 56th minute, they left it too late to make a solid comeback.