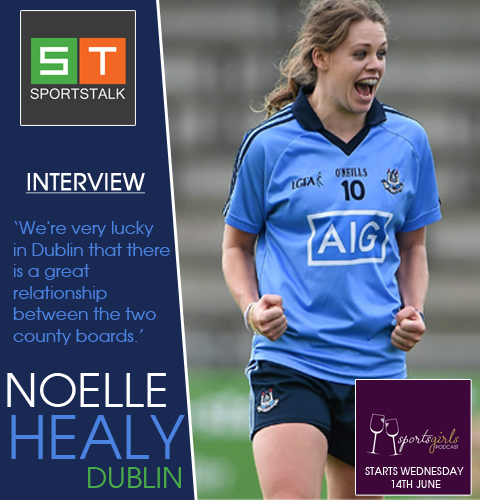 This week Sportstalk.ie caught up with Dublin LGFA star and Castleknock native Dr. Noelle Healy. In and around her extremely busy lifestyle of playing with Dublin and working as a Doctor she kindly took out some time to chat about life with the LGFA and the upcoming championship.
Noelle has been playing with the Dubs since 2007, making her championship debut against Meath in the Leinster championship that summer.

Over the last decade Noelle admits that there’s been significant changes in the LGFA: “in the year or two after I started playing was when I first saw the biggest changes, particularly in the introduction of strength and conditioning training. Initially these sessions were done on your own time, but in the last few years we’ve been doing collective gym sessions together which means 4-5collective sessions a week.”
This is 4-5 sessions that Noelle somehow manages to fit in around her busy schedule as a Doctor. One thing that Healy notes is how “the focus has shifted a lot onto recovery and “prehabilitation” as well which is great, as it means we can get more out of ourselves as athletes without breaking down with injury.”
This is a crucial aspect of an athlete and its one of the main changes that is being seen across the GAA and LGFA collectively. The nature of the LGFA has changed and “the increase in demand reflects a more professional attitude in the game though which is great.” As great as it may sound there is still an attitude with some that in this day and age, most people would say that LGFA players are mad for giving up so much time…… Noelle disagrees though; “The increase in demands reflects a more professional attitude in the game though with is great” It is this demand from the players that has helped the organization grow so much lately.

It is within this persistence that Healy has found that “that was the attitude that people had when I was in school or college, but more recently I’ve found that people are really supportive or encouraging. I don’t know is that because people regret giving up sports they had been involved in when they were younger.” This drive and determination that is epitomized in Noelle is something that makes her return to the county each year: “I’m sure it sounds cheesy, but the love of the sport is a factor. It’s a massive honour to be able to play a sport you love at such a high level, and to be able to train and play against the best. With that, the girls you play with are a huge part, we’ve been on a such a great journey together, made some amazing memories. On the good days and the hard days, they were the people that shared it all with you. Some of them I’ve known and played with since I was 13 years old. So, it’s very hard to imagine stepping away from that.”
This is something that embodies the LGFA, the community factor. Many girls begin playing together at a young age and they grow up together with football as their unique bond. Those who stick with the sport throughout the years like Healy says have “amazing memories” and they’ve been through the winter slog and the summer smiles alike thus one can understand how the comradery holds them together. The LGFA has made huge strides of late, but there is always room for improvement. Noelle thinks the LGFA has been “the most pro-active and progressive female sports organizations in Ireland over the previous few years. But without a doubt there is still work to be done, particularly in improving the national coverage and attendance at games.” One way this is being improved is through the addition of curtain raisers.
The profile ladies football gained from the curtain raiser in the league campaign last year against Mayo was huge and now again with Laois and Kildare in this year’s championship. Healy thinks more of these styles of fixtures should go ahead “obviously the ideal situation is our women’s county teams filling these venues and drawing these crowds by themselves. But these curtain raisers are a big step towards this, and are a great opportunity to showcase the sport and the skills of the players who are involved in the game. I think it will also avoid making fans chose which team to support when fixtures clash. The communication between the GAA and the LGFA is central when it comes to the promotion of ladies’ football. Dublin above other counties seem to be relatively equal between the LGFA and the GAA. Once again though progression is still needed. “We’re very lucky in Dublin that there is a great relationship between the two county boards.”
“All four codes in Dublin obviously have the same sponsor in AIG, but we also all train and use the same facilities for most of the season, which is great as we all have equal access to a great centre. But in saying that, it’s only this year that we’ve gotten food after sessions, something that men’s team would have had access to for years. It’s a small thing, but makes a surprisingly big difference in recovering from sessions and taking one less job from training prep! Hopefully with improved government funding coming in this year we will see another step towards providing things like reimbursement from injury treatments / investigations and travel expenses.”
Noelle’s determination and ambitious demeanour seen her gain a spot on the team of the league at number six, reflecting on this she said “Playing in a different position is always challenging so from that point of view it was nice to get.
I think being able to defend well is hugely important in any position you play in, so I was happy to get to improve that part of my game early in the season.” The diversity of Healy is something that stands out to me, her versatile way on the pitch has resulted in her playing in nearly every position and excelling in them too; admittedly her preferred is “half/wing forward is the position I’ve played most in. That position probably suits the game I like to play most. It’s a position that demands a nice mix of tackling, ball carrying, shooting and hard work!
Dublin were the only Leinster team to compete in division one in the league, but Healy doesn’t see this to be that much of an advantage: “I think the league is mostly about getting your game plan together and getting match fitness it, the standard in all of the games throughout the divisions were brilliant and this was reflected in the finals of each.” She also thinks the men should look and gain inspiration from the championship structure “I think the men’s championship should take some inspiration from the structure of our championship. A lot of teams over the past have benefited from success and development at junior and intermediate level and progressed to be hugely competitive at senior. I don’t see why the same couldn’t happen in the men’s.”
When it comes to championship you can sense the excitement from Noelle “championship football is a different beast! I love the week leading up to a championship match, there is always such a great buzz around training. A bit of nervous energy and excitement. The provincial championships are special. You know the teams you’re playing against so well, and there’s always a great bite to the matches when there is so much at stake”.
Some might wonder would Dublin become complacent in Leinster but certainly not Healy, we can certainly see the tenacity rising in her as she speaks.

A few rapid questions for Noelle,
What one Irish Sport Star do you look up to and admire?
Analise Murphy, her performance at the Olympics was incredible, especially after the disappointment of the previous games

Where do you most like to go on Holidays?
Very hard to beat a ski holiday!

What advice would you give young Ladies Footballers today?
Focus on the skills of the game, get good off both feet. If you believe you’re good enough, don’t give up because someone thinks you’re not.

What is your Occupation?
Doctor

What is your Club?
St Brigids

Who is the toughest you have marked?
Leah Caffery / Sinead Goldrick

Who is your favourite pundit?
Jim McGuinness

What annoys you most about Social Media?
I don’t think it gives a very realistic outlook on how most people live their life.

Who are your favourite people to follow on social media?
I don’t really have one favourite, I like following happy pear / little green spoon for good food recipes.

If you could play any other sport what would it be?
I played basketball and did athletics in school. I would love to be able to play tennis better.

This is the last ever year of minor hurling & football...