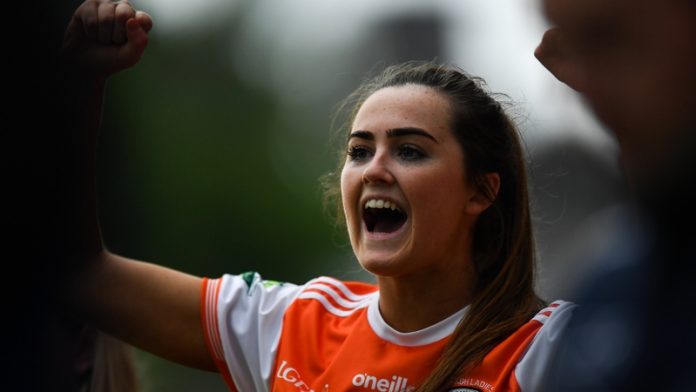 Macken suffered a cruciate injury last year but worked hard to get herself back fit for this year’s championship: “It was hard to know if I would get back to that level. I suppose I put the work in, especially over lockdown. I’m just happy to be back and hopefully may it continue.”

She was modest about her tally: “It’s not bad. I think overall the performance; a lot of work out the field from my teammates got me on the ball and that’s all I had to do. That’s my job. If I didn’t do it I’d be getting a few words.”

Armagh and Tyrone were the ‘live’ game on TG4’s Friday Night Lights and they didn’t disappoint. Mackin said: “It was different. Not many games are played on Friday night. It was great that it was televised and all the games will be televised. That’s another step in the right direction for the LGFA. It’s just good to get out there and play championship football.”

With one win behind them, Armagh’s game against Mayo on the 14th could be a ‘winner takes all’ decider. Mayo take on Tyrone this weekend with Mackin and Armagh interested spectators: “It’s harder to prepare for the game now, than what it usually is. We’ll have a look at them next week. It’ll be an All-Ireland Final for us, no matter what way it goes with them against Tyrone. It’s a wee bit more difficult with one team going through. We’ll prepare well and see how it goes.”

Hurling in Longford made to suffer once again