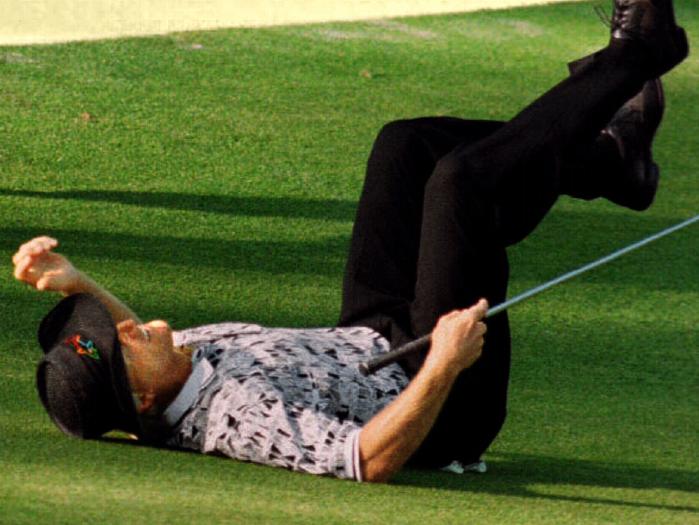 In golf they call it the yips. I think in Ireland we have a term for it that covers a range of sports in general – bottling it. Golf seems to be the sport where the phenomenon of losing it, with the finish line in sight is most prevalent.

Perhaps the most high profile collapse in golfing history belongs to Jean Van De Velde at the 1999 British Open. He arrived at the 18th tee needing only a double bogey six to become the first Frenchman since 1907 to win the tournament. He had played error-free golf for much of the week and birdied the 18th hole in two prior rounds.

Despite a three-shot lead, Van de Velde chose to use his driver off the tee, and proceeded to drive the ball to the right of the burn and was lucky to find land. Rather than laying up and hitting the green with his third, Van de Velde decided to go for the green with his second shot. His shot drifted right, ricocheted backwards off the railings of the grandstands by the side of the green, landed on top of the stone wall of the Barry Burn and then bounced fifty yards backwards into knee-deep rough.

On his third shot, Van de Velde’s club got tangled in the rough on his downswing, and his ball flew into the Barry Burn, a water hazard. He removed his shoes and socks and gingerly stepped through shin-deep water as he debated whether to try to hit his ball out of the Barry Burn, which guards the 18th green. Ultimately, he took a drop and proceeded to hit his fifth shot into the greenside bunker. Van de Velde blasted to within six feet from the hole, and made the putt for a triple-bogey seven, dropping him into a three-way playoff with Justin Leonard and Paul Lawrie. Lawrie would eventually triumph in the playoff.

Not far behind in golfing lore is the 1996 Masters collapse of Greg Norman. Norman had a six shot lead over second place Nick Faldo going into the final round but endured an absolute nightmare day in front of the onlooking world to finish five shots behind Faldo. Have a look on Youtube; it makes uncomfortable viewing. Norman was generally accepted as being the most gifted golfer of his generation but just could not control the top six inches and retired with just a fraction of the majors that his talent deserved.

However at least Norman did indeed retire with two major wins to his name. Colin Montgomerie is generally considered to be one of the best golfers never to have won a major championship; finishing in second place on five separate occasions. During what most consider to be his best years in the 1990s Montgomerie had several close shaves. A third place at the 1992 U.S. Open at Pebble Beach Golf Links was the first of these. He was prematurely congratulated by Jack Nicklaus who said “Congratulations on your first U.S. Open victory” to Montgomerie after he finished the 18th hole on Sunday. Tom Kite, who was still on the golf course when Montgomerie finished, wound up winning the championship.

Sergio Garcia is another hugely talented player that has not won any of golf’s major championships, despite a number of near misses, including four second place finishes; twice at The Open Championship and twice at the PGA Championship, with a further six top five finishes without breaking through. Garcia is the highest-earning golfer on the PGA Tour without a major championship win, with career earnings of over $42 million. Lee Westwood is another who has consistently played near the top end of professional golf yet never won that elusive major. He first broke into the world’s top ten almost twenty years ago, ended the reign of Tiger Woods to become world number one in 2010, has finished in the top 10 of a major eleven times, has 42 professional tour wins, yet no major.

It was unusual that this Saturday at the US Open there were so many men with painful histories of collapsing still in contention for victory. Adam Scott (2012 British Open near miss), Dustin Johnson (2010 and 2015 US Open near misses), Jordan Spieth had just endured his Masters implosion, while Garcia and Westwood were there as usual. Scott and Spieth fell away during Saturday’s play meaning it’s almost certain someone is about to win their first major. Westwood, Garcia, Johnson; it’s hard to know who deserves this major the most. In the middle of all this is an Irishman by the name of Shane Lowry. He won’t hold any fear at he looks at the men chasing him. Something has got to give at Oakmont today. It will make intriguing and perhaps painful viewing.