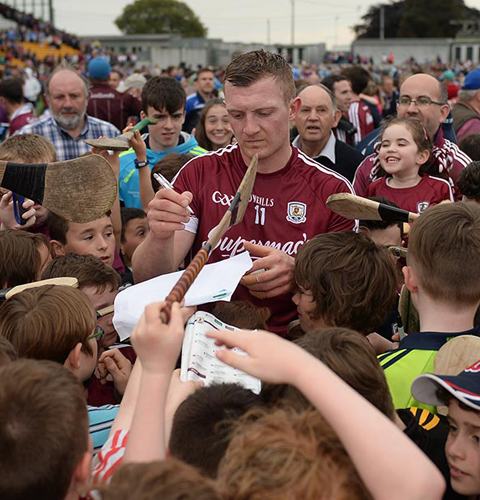 Picture the scene. The year is 2006. The Celtic tiger is at its peak. Thousands of people across the country are desperately scrambling (and failing) to secure enough finance to fund a house. Hundreds of Polish nationals are flooding into Ireland on a weekly basis, trying to get a piece of the pie of our economic “miracle”. During this time of apparent wealth, economists and analysts are searching for answers as to what’s happening, so when asked about the rising rate of inflation at the time our then revered, now reviled, ex-Taoiseach Bertie Ahern offers up the explanation “It’s probably because the boom times are getting even boomier”

Of course, we all know what happened next. Our wonderfully constructed Asian-like economy, The Celtic tiger, turned out to be little more than a house of cards. The property market collapsed, emigration soared, but currently in Ireland, we, or to be more precise, the GAA, is going through a similar boom, and thankfully it seems to be on a more stable footing. Attendances at inter-county games this summer are spiking massively and, thankfully, it’s a lot easier to believe in a person’s love for Gaelic games and their county than it is to have faith in the internal workings of Anglo Irish Bank.

Compared to this time last year hurling has seen a massive 45% increase (300,000 in 2017, 205,000 in 2016) in attendance at Championship games. So, what can we attribute this new-found boom too? Well, you may say it’s the eternal beauty and quality of the games, or it could be partly attributed to the nice weather. Perhaps it’s because there’s no Soccer World Cup/European Championships to sway Irish fans attention. But the size of the crowds is probably more to do with the composition of counties who are becoming successful.

For example, Wexford’s return to hurling relevance can’t but be a help to the organization’s coffers. The Slaneysiders don’t dine at hurling’s top table often, but when they do, they come in their droves. This year’s Leinster final crowd of 60,032 was the biggest of all time, and the Leinster semi-final against Kilkenny was also a sell-out. Davy Fitzgerald has his detractors in the media, but he has galvanized interest in hurling in the county.

Likewise, in Munster you can’t doubt the effect that Cork’s return to prominence has had on the crowd surge. In terms of population, the county is the third biggest in Ireland, the second largest in the republic, and, in contrast to Dublin, their support is primarily hurling based. So, the team’s success and attractive style of play are without doubt the biggest cause of increased numbers at games in the province.

Kilkenny’s demise in raising attendances can’t be over-estimated either. While it is the most successful hurling county of all-time, Kilkenny has never been noted for their horded masses of support, particularly around Leinster semi-final and final time. In recent years, Leinster final crowds rarely reached much higher than 30,000. Their dominance over the last 15 years may also have contributed to their rivals’ non-attendance at games “Sure why would I go to that game?” Opponents fans may have said “We’re going to lose. We’re playing Kilkenny” This year though, that has changed, as counties that previously would never have beaten Kilkenny, or even believed they could, have managed to finally gain an upper hand on them. And there were plenty of people willing to see those games in Wexford Park and Semple Stadium.

What’s also interesting about the current attendance boom is that it’s not just confined to the senior code either. After Cork and Tipperary played out a classic draw in the semi-final of the All-Ireland minor championship a few weeks ago in Semple Stadium, a massive crowd of 8,142 turned up for the much-awaited replay on the following Monday night in Pairc Ui Rinn. And the under-21 Leinster final between Kilkenny and Wexford also had a very respectable audience of 6,000 or more,

In football, the attendance levels have been more in line with what we’ve come to expect in recent years, but Sunday’s Leinster final between Dublin and Kildare was a major outlier. After the huge following at the Leinster hurling final there was a belief that this would be the first year since 1997 that the hurling final attracted a bigger crowd than the football decider, but Dublin and Kildare obviously saw the hand of Galway and Wexford, and decided to raise it.

Sunday’s crowd had probably more to do with the progress being made by the Lilywhites, who were easily one of the best supported counties in the late 90’s during the halcyon days of Mick O’Dwyer, than any great surge in Dublin interest. Admittedly they didn’t come close to beating the Dubs on the day, but the hope engendered in the side by Cian O’Neill is probably sustainable over the rest of the summer. If the county can become more competitive in the province over the next few years, we may see even bigger crowds. The GAA always trod a fine line when it comes to Dublin’s effect on crowds. On the one hand, a strong Dublin is essential, but if the county is too dominant, then there are few people interested turning up to see them hammer Longford, Westmeath or whoever.

As for what happens over the rest of the summer, we are likely to see this trend continue. Obviously, any Dublin game from here on in will probably be a full house, and the All-Ireland quarter finals have been usually noted for their large gatherings. They would never say it explicitly, but I’m sure the GAA would love to see the likes of Mayo and Donegal in the latter stages as, in contrast to the likes of Cork football for instance, those counties are noted for their strong followings.

In hurling you can be sure that as long as Cork are playing the hordes will follow them. You would hope the support levels for Wexford won’t drop after one disappointing result in what has thus far been a hugely encouraging season. Their first victory over Kilkenny in 58 years may also add a few numbers onto the hordes of Deise supporters for the rest of the championship, although perhaps the GAA’s strange decision to host the All-Ireland quarter finals in Cork will reduce the level of spectators at those games. And Tipperary, Clare and particularly Galway have reason to believe they can win an All-Ireland, so you can only imagine their fans will be keen to try and see that.

So where is this all going to lead to? Well, more money for the organization for one. If this summer was a regular occurrence, the GAA probably wouldn’t need to think about all those additional revenue streams. Could you imagine a world where the GAA didn’t need to have their games televised on Sky, or hire out their stadium to Coldplay in the summer? Haha, no of course not. Oh no, they haven’t got enough money yet, and probably never will, but at least most of it now seems to be coming from whatever happens on the field. So, for however long this current boom may be for, just enjoy it while it lasts.

GAA should prioritize club activity when games start back up again

Shane Lowry: As much a GAA success as a Golf one