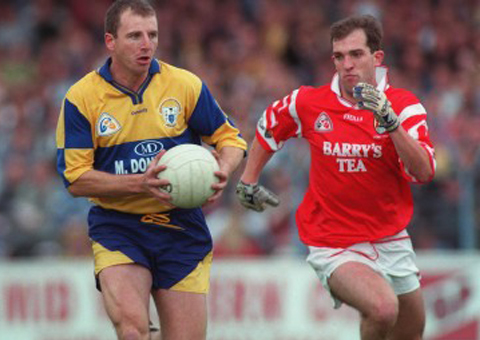 Although goalkeepers normally stick together and Joe Hayes did admit, jokingly, that Roscommon’s Shane Curran was his idol, from a Clare point of view the keeper’s idol was his own clubman Martin Daly.

Daly was the man that scored their second goal when the Banner County won the Munster title in 1992.

“When I was young my first Clare football game that I can remember was the Munster Final in ‘92. The auld fella brought me; he was reporting on it. Into the Gaelic Grounds, in the pressbox.”

Sean Og was quick to point out that the infamous phrase “there won’t be a cow milked in Clare” was coined by Marty Morrisey that day.

Being a Lissycasey boy Hayes was delighted when Daly came on in that final:

“I watched it in the pressbox, 10 years of age and Martin Daly came on for Clare. Martin Daly is my clubmate and sure the auld fella was delighted. Then he scored the goal. That was it, Daly was my hero from then. I wouldn’t tell him now. He wouldn’t know how to work podcasts so he probably won’t be listening to this or ever listen to it.”

One regret though is that Hayes never got to tog out for Clare alongside Daly but he made up for that at club level:

Hayes admitted what made Daly special for all young lads: