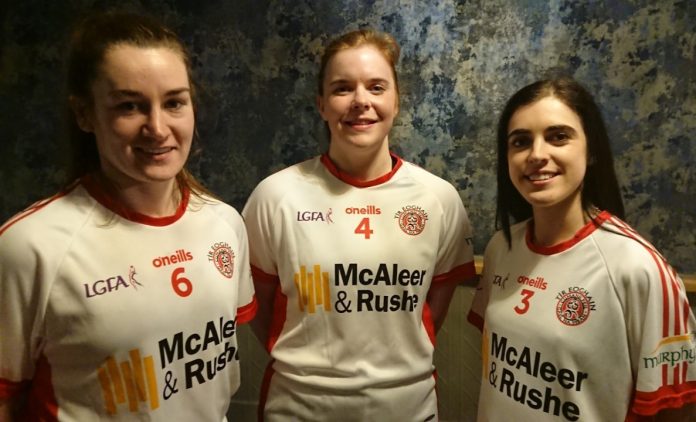 As Mc Aleer and Rushe were confirmed as the new sponsors of Tyrone GAA they also confirmed a continuation of their sponsorship of the Tyrone ladies GFA, a deal that dates back to 2016.

The Cookstown company came on board to support the senior ladies side initially but as Tyrone claimed the all Ireland intermediate championship in 2018 they rolled in behind all the county sides and now all the counties teams will once again carry the company livery.

The new deal, coming as it does on the back of Mc Aleer and Rushes return as the  main County GAA sponsor means that the company have thrown their weight behind all codes in the county , still a unique level of support.

The company were established in 1967 but have constantly embraced the changing face of the construction and property development market, so it was no surprise that took that initial step with the ladies game several years ago.

Speaking as the renewal was confirmed on Friday County Chairperson Donna Mc Crory spoke of her delight,

“We are delighted that Mc Aleer and Rushe have once again supported us they have been brilliant and what a great company they are, look at the job creation and they have generated so much pride and self confidence in the County, they are a genuine benchmark.  Seamus Mc Aleer and Eamon Laverty are solid club men at Kildress and Stewartstown and never afraid to put their shoulder to the wheel” pointed out Mrs Mc Crory

Mc Aleer and Rushe’s support of ladies football has been a massive boost to the County allowing the teams all to benefit from their backing and Mrs Mc Crory was full of praise for their commitment,

“There was no haggling,  as the deal was due for renewal we discussed it and without hesitation they were on board again , that level of support is exceptional and it’s great to see them on board with everyone”.

Confirming the continued support of the ladies and unveiling their return as flagship sponsor too to other codes, Seamus McAleer & Eamonn Laverty :Directors’ of the company  jointly stated

“Our experience of being sponsor in the past was very positive , We warmly wish all players and management of all codes the very best of luck for the incoming season and are only delighted to be a part of the next chapter after the heights of 2021”