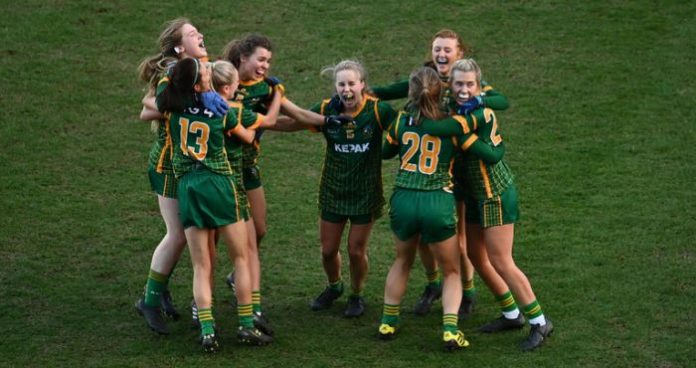 Vikki Wall was inspirational as Meath made it third time lucky and claimed the Ladies Intermediate title with a deserved win over Westmeath.

After the heartbreak of losing the two previous finals Meath took the game to Westmeath right from the start. The Royals conceded three goals inside the opening six minutes but were able to bounce back from that with Wall leading the line.

It was a tight game until the 47th minute when Wesmeath’s Johanna Maher was sin binned. With the numerical advantage for 10 minutes Meath kicked over four unanswered points to go six points ahead.

Maher was two minutes back on the field when she was shown a second yellow card and a red while Vikki Wall was sin binned but it mattered little at that stage for Meath.

It was Stacey Grimes that opened the scoring in the first minute; she was fouled and dusted herself off to fire over the free. Westmeath replied with a goal from Lucy McCartan after a good ball in from Maher.

Meath were back in front in the fourth minute but Westmeath hit them again with a second goal from McCartan in the fifth minute and one minute later Anna Jones got Westmeath’s third goal to put her side ahead by four points.

That was to be Westmeath’s last score for 10 minutes as Meath took control of the game and turned a four point deficit into a three point advantage with Wall scoring a terrific goal in the 11th minute; the Dunboyne player burst through and had one thing on her mind – GOAL.

In the 20th minute Meath came close to getting a third goal; with Westmeath keeper Lauren McCormack out of her goals Niamh O’Sullivan saw her opportunity but her shot came off the butt of the post.

Westmeath cut the deficit to one in the 27th minute but a pointed free from the impressive Emma Duggan gave Meath a two point lead at the break – 2-08 to 3-03.

Three minutes into the second half and Westmeath were back in front after Fiona Claffey was fouled and Leona Archibold dispatched the spot-kick past Monica McGuirk. Another free from Duggan drew Meath level minutes later.

Meath took the lead again in the 46th minute and it was a lead they wouldn’t relinquish. In the 47th minute Westmeath were down to 14 players when Johanna Maher was sin binned. Meath used this to their advantage with Vikki Wall hitting over two excellent points and Duggan getting two more (one free).

Both teams had to end the game with 14 players after Maher was shown a red card (second yellow) and Vikki Wall was sin binned in the 59th minute. It wasn’t to dampen Meath’s spirits as they made a welcome return to senior championship football.