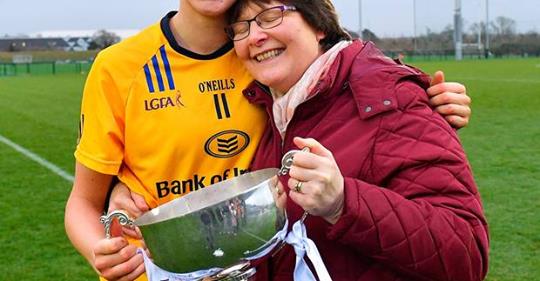 Today is International Women’s Day and on this week’s Sportsgirls Podcast Aisling Moloney talked about one influential woman in her life; her mam.

She said: “She never played football. Mam’s side of the family wouldn’t be football orientated, whereas my dad’s side would be very much football orientated. Sometimes you are on the pitch so many times a week you don’t want to be there but mam would nearly force you to go and see a match, if there is a match on local.”

Aisling revealed that it didn’t matter who was playing or where the game was, her mam would be at a match: “If there is any match on be it U6s to Junior B men’s or women’s she is going to be there, no matter who is playing. It’s like a magnet.”

Aisling’s family are very important to her and her parents travel all over the country to support her. She appreciates their support and the banter she has with her mam, even when things don’t go well for her: “I don’t really hear her, it’s dad I always hear. The last day I got a yellow card against Donegal and I ran over, off to the sideline and there the two of them are smiling at me being like what did you do that for. I was like ‘look sure you know it happens’ and she was laughing at me and hitting me across the back going into the dug-out. There is a bit of banter there as well. She is brilliant.”

Amanda Brosnan believes the pressure is on Dr Crokes Saturday