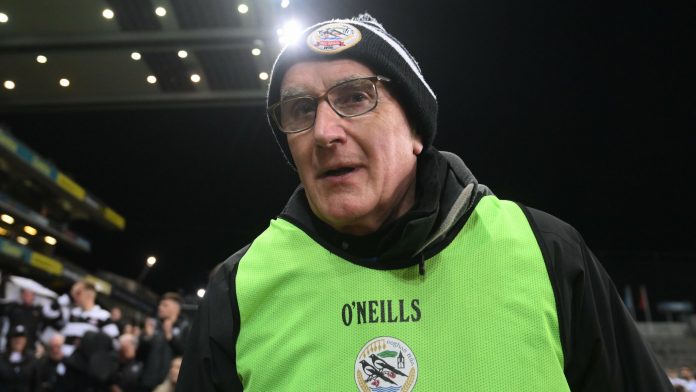 Three weeks after leading Kilcoo to the Holy Grail, manager Mickey Moran has decided to step down.
The Down side looked to have been beaten in a second All-Ireland Club Football final, but Jerome Johnston’s dramatic goal right at the end gave Kilcoo the title they had wanted so much.
Club secretary Seamus O’Hanlon spoke of their admiration for Moran: “We will always be indebted to Mickey. The first thing is that we’ll wish him a very long and happy retirement.
“Our players had the best relationship you could possibly imagine with Mickey. He was like a father figure to the players in Kilcoo and we’re sorry to see him go.”
Moran managed his native Derry three times and also had spells in charge of Sligo, Leitrim, Donegal and Mayo. He was part of manager Eamon Coleman’s management team when Derry claimed their first and only All-Ireland Senior Football title.
As manager he had lost four All-Irelands – once with Mayo, twice with Slaughtneil in the club finals and then 2020 with Kilcoo.
Speaking after the club final win over Kilmacud Crokes Conor Laverty said: “This dream wasn’t happening without Mickey so there was no way we were lifting that cup without him.
“That man needed that. We spoke as a group that we were going to do that for him this year and there was no other way about it.
Moran’s assistant managers Conleith Gilligan and Richie Thornton will become the club’s joint bosses for this season.