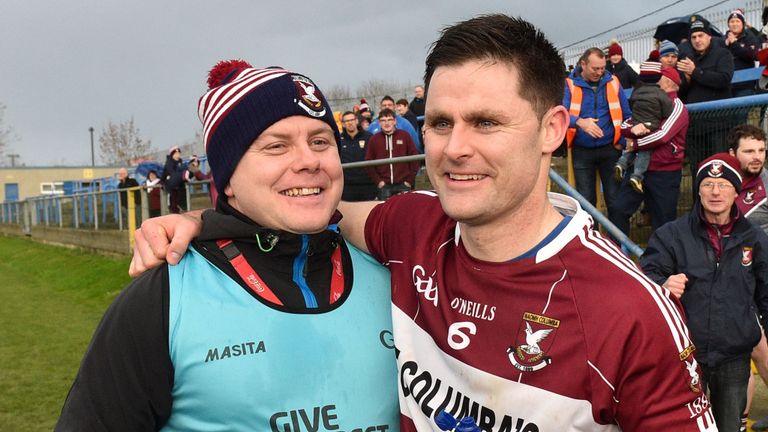 Deniese O’Flaherty looks back on Mullinalaghta’s recent success and how it all started for the Longford club..

July 31st 2016 Mullinalaghta’s David McGivney kicks over a late free to earn his side a draw against Abbeylara in the opening game of the Longford SFC in what was Mickey Graham’s first championship game in charge of the North Longford club. Little did we know that score was the start of something remarkable that would eventually see Mullinalaghta claim 3 Longford Championships in a row and culminate in them being crowned Leinster Senior Football Club Champions 2018.

I’ve been so lucky that my job has allowed me to cover Mullinalaghta from league games to Longford SFC and Leinster SFC games. I’ve thoroughly enjoyed being on this journey with them. As a proud Longford person I’ve memories that will last a lifetime.

When you look back on what Mullinalaghta have achieved, 2016 was the year that they finally came of age and it was under the guidance of Graham. So many managers had brought them close but as the players have commented over the last number of years the Cavan man was the missing piece of the jigsaw.

Graham and John Denning are now honorary Mullinalaghta men. Graham was appointed Cavan manager in August but said he was going to see out the year out with Mullinalaghta. This has to be the longest goodbye.

Mullinalaghta captain Shane Mulligan told me before the 2016 final what effect the Cavan man had on them: “He (Mickey) has been a breath of fresh air. It was one of those things where he just fitted like a glove. He just walked into the club and just clicked with the players. He worked with us and we with him.” Mullinalaghta bridged a 66 year gap to claim the Sean Connolly Cup.

A Leinster campaign didn’t faze them and wins over Stradbally and St. Loman’s saw them face Dublin’s St. Vincent’s in the semi-final, they went toe to toe with them but in the end the Dublin side got the better of Mullinalaghta.

Their comeback against Kilmacud was no surprise to Longford GAA supporters who saw them show nerve, steel and courage in two championship games in 2017. In the quarter-final they were trailing Killoe by 8 points with just 18 minutes gone on the clock. Mullinalaghta don’t panic, if you didn’t already know that.

Mickey Graham once said: “When things are going against you and the chips are down; we don’t look to throw in the towel, we look for solutions and find answers. Guys have stood up and won the next ball, the next breaking ball, got the next score. Whatever you have to do. We have so many lads that can do that.”

Against Clonguish in the semi-final they were down by two in stoppage time. Mullinalaghta came back and swept them aside in the replay. Their neighbours Abbeylara were to endure another defeat in the final.

Talking to Mickey Graham and Mullinalaghta players this year the St. Loman’s defeat in Leinster last year came up a few times; it was the one that got away for them but the hurt they felt then certainly drove them on.

2018 will live long in the memory of Mullinalaghta people. So much was made about the 50th anniversary of Longford’s only Leinster Senior Football title; they too were led by a Cavan man. What a fitting way to commemorate that success – a Longford club winning a Leinster title for the first time.

When Gary Rogers stood up to take the penalty in the Leinster Final it was like David O’Leary’s famous spot-kick in Italia 90. A parish and county held its breath as the garda made no mistake. History was made. Tears were shed (a lot by me).

Speaking to Rogers before the final he was hoping just reaching the decider would give other clubs belief: “It’s great for us and for other clubs. It will give them hope. Even for the county team it shows we can compete, even with low numbers. When you have 15 lads who are willing to put the work in anything can happen.”

One thing I’ve learned from sport is that sometimes the underdog refuses to lie down and that’s what happened last Sunday. Those lads had the belief they could achieve anything and they did just that. For those players the jersey is everything; it is who they are and where they are from. That is what spurs them on.

Longford is a small county and when you are involved in the GAA you get to know clubs very well. Those lads that represent Mullinalaghta are a credit to their families, the parish and the county of Longford. One thing is for sure they will not be found wanting against Dr. Crokes on February 16th.