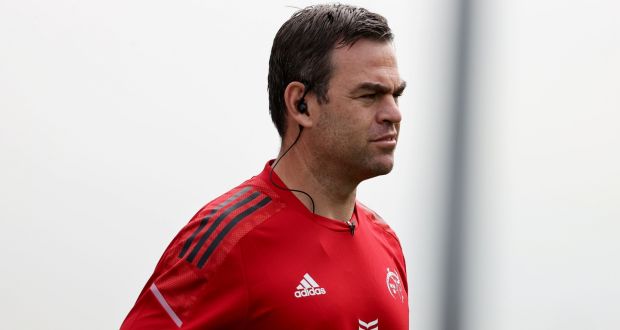 ohann van Graan says the return of Munster’s Ireland international contingent ahead of this Saturday’s Leinster clash has brought a feelgood factor to the camp.

Munster captain Peter O’Mahony and fellow Six Nations Triple Crown winners Joey Carbery, Dave Kilcoyne, and Conor Murray have all returned to training at the High Performance Centre in Limerick and are available for the United Rugby Championship derby at Thomond Park, which was rearranged from last December 26.

Tadhg Beirne and Andrew Conway were also among the returnees but the former is recovering from a “low-grade thigh injury” sustained in the final round of the championship against Scotland and a decision will be made on his availability later this week while wing Conway is ruled out with a knee injury.

Munster lie third in the URC following their 51-22 victory over Benetton in Cork last Friday, and the added presence of senior frontline players as well as the trio of Ireland Under-20 Grand Slam winners Patrick Campbell, Tony Butler and Ethan Coughlan for the end-of-season push for silverware on two fronts made for a great start to the Leinster match week, according to the head coach on Tuesday.

“Yeah, it was a real feelgood Monday,” van Graan said. “We felt that we delivered a good performance on Friday evening. The 20s lads were back off their Grand Slam, the national guys were back after their Triple Crown and it’s the first time we’ve been together as a squad since January 23rd so there’s a great buzz around the place. Everybody is looking forward to not only this weekend but also to the next block of games.

The Leinster game this weekend kicks off an important run of games both in the URC and the Heineken Champions Cup with a trip to Exeter Chiefs and home return leg in the round of 16 to follow on successive Saturdays and van Graan is viewing them all as a block.

“It just happens to be Leinster before we play the European games and then a big game against Ulster and then Cardiff at Musgrave Park. So a magnificent block of games ahead. We’re pretty well set in both competitions.

“It’s week 41 of our season and we’ve worked 40 weeks to put ourselves in this position not only in the URC, which is shaping up to a great finale in terms of the teams and who’s fighting for potential home semi-finals, home quarter-finals and more to get into that top eight, and then obviously Europe to look forward to in terms of what we’ve produced in December and January to put us into that position.

“That’s what you’re working for, for weeks like this and the next four weeks to come.”

Be constructive in criticism but don’t stoop to personal abuse