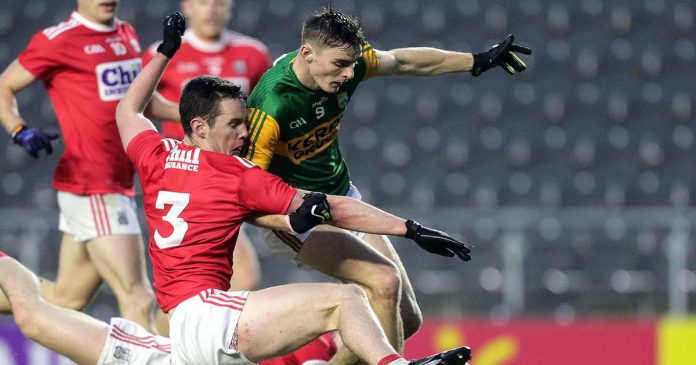 The Munster Council’s CCCC have moved the Munster football semi-final to Fitzgerald Stadium in Killarney. The game had been originally fixed for Cork’s Páirc Uí Rinn on the basis the capacity would be extended to 15,000.
The game now will take place at the Kerry venue on Saturday May the 7th with a 6pm throw-in time. In a statement released the province’s CCCC said: “Following an independent statutory annual health and safety inspection, which identified a number of issues at the ground, the capacity was reduced to 9,200.
“And even if all the required works are carried out in time, the maximum attendance that can be achieved at the venue is 11,000.”
The average attendance of the last three Cork-Kerry games in the Munster championship held at Páirc Uí Chaoimh was in excess of 22,000. The home and away arrangement between the two counties meant it was Cork’s turn to stage the match following from last season’s Covid-impacted Munster final, which had a 2,500 limit on Fitzgerald Stadium.
Páirc Uí Chaoimh is unavailable due to the Ed Sheeran concert the week before which requires remedial work on the pitch and this wouldn’t be finished in time. As compensation for Cork losing out, it means the next two games against Kerry will be played at Páirc Uí Chaoimh.
Hosting the game at the Blackrock venue would’ve been a logistical nightmare for season ticket holders in both counties. Sky Sports are broadcasting the game and their trucks would take up most of the space behind the only goal with room for parking.
The Cork footballers put pressure on the county board to back their stance on insisting the game go ahead at Páirc Uí Rinn.