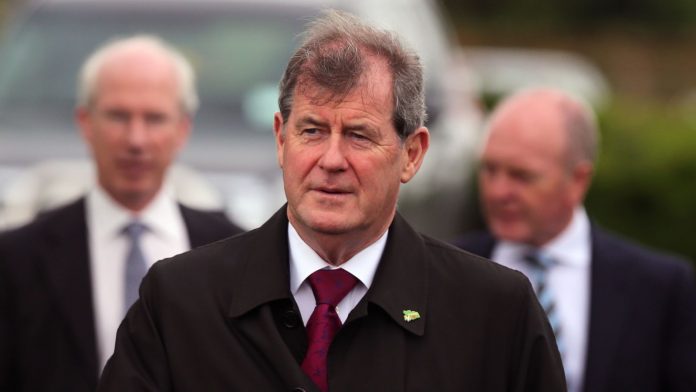 Trainer Ciaran Murphy spoke of his delight after leading Aintree Randox Grand National contender Enjoy D’Allen was bought by JP McManus.
Speaking to the Racing Post Murphy said: “He really impressed us with his third in the Paddy Power Chase at Leopardstown over Christmas and JP has come on board and purchased him with a view to going to Aintree. It’s a fantastic boost for a small yard like us to have the support of someone like that.
“We made a plan some time ago to target the Grand National and have stuck to it regimentally ever since. We’ve been training him for one day. Everyone here in the yard is behind him and doing everything we can get him there in one piece.”
The horse is a huge boost to Murphy’s Mullingar yard. When weights were revealed last week for the Grand National Enjoy D’Allen was allocated 10st 5lb and is 16-1 co-favourite with bookmakers William Hill.
McManus has won Aintree in 2010 with Don’t Push It and last year with Minella Times. Enjoy D’Allen finished third in last year’s race. About this year’s race Murphy said: “In the last third of the Grand National, all going well, he’ll hopefully be able to keep galloping. He has bags of stamina but was still well able to lie up with the pace early in the Irish Grand National last year. His form in big handicap chases at Fairyhouse and Leopardstown looks solid.”
For Murphy it’s all about Aintree. He said: “We made a plan some time ago to target the Grand National and have stuck to it regimentally ever since. We have experience dealing with some of those Aintree horses and have tried to learn as much as we could down through the years from that.
“We have one in our own hands this time and hopefully we can do him justice. This horse coming along in my second season with a licence is a bit of a dream come true.”
He went on to say: “I think it’s fair to say that we’ve been trying to progress in the last six months, to remould what we have gradually in terms of increasing quality. We’re extremely keen to develop a nice team to go to war with and have room for 70 horses.”