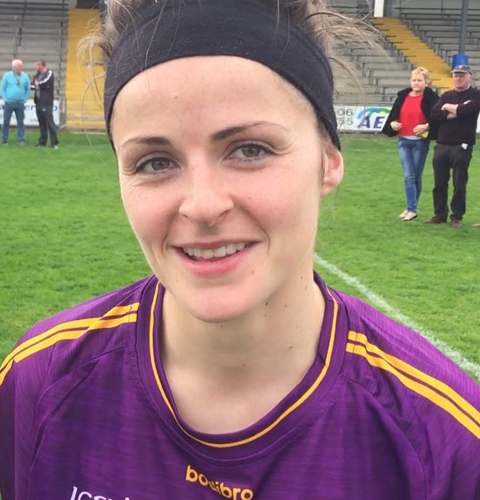 Catriona Murray scored 3-5 as Wexford won the Lidl Ladies Division 3 title at Birr on Monday afternoon as they made up for the disappointment of coming so close last year. The Slaneysiders lost to Tipperary last year in the Division 3 decider, after a replay, and were out to go one better this year. The win also saw them gain revenge on Meath who defeated them in the Leinster Intermediate Final last year.

Murray and her finishing were the difference between the two sides. The Royals had to start the game without star forward Vikki Wall due to injury. She was introduced in the second half and kicked over two points.

There was nothing between the sides in the first half. Wexford opened the scoring with a point from Murray. The sides were level in midway through the first half with Meath taking a two point lead in the 20th minute.

In the 39th minute Murray got her and her side’s second goal to extend Wexford’s lead to six points. Bernie Breen and Niamh Gallogly as Meath tried to cut into Anthony Masterson’s side’s lead. Meath were awarded a penalty in the 49th minute when Fiona O’Neill was fouled. Stacey Grimes put away to penalty to cut the deficit to just three and it was game on. Aoibhin Cleary hit over a neat point to leave two between the sides.

Wexford replied with Murray grabbing her hat-trick to put them ahead by five. Grimes hit back with a point as Meath kept with Wexford. Breen and Wall exchanged points as the game entered its final minutes. Meath keeper Monica McGuirk pulled off an excellent save to deny Aisling Murphy getting a fourth Wexford goal. They did however hold on to win by four points and gain promotion to Division 2.

Find out what “A 16 year old Cora Staunton would say...