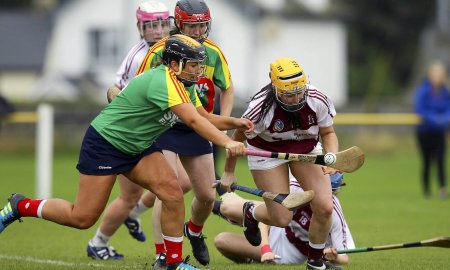 Carlow sharpshooter Ciara Quirke was the star for Myshall with her tally of 1-5 which was crucial in their hard fought victory over Galway intermediate champions Cappataggle. Myshall who have their eyes firmly set on being crowned All-Intermediate champions after dominating Carlow camogie for nearly 2 decades and winning two junior All-Irelands in a row in 2012 and 2013. In a tight opening half both sides went in at the interval tied on 4 points apiece. The Galway sides’s scores coming from Amy Treacy (3) and Emma Reynolds (1). While Myshall’s first half points came from Breege Nolan, Ciara Mullins and Ciara Quirke.

Upon the restart it was Cappataggle that took the lead when free taker Amy Treacy fired over 2 more points. This was soon cancelled out when a Ciara Quirke free went all the way to the back of the net. Myshall were now in the driving seat and 3 more points from Quirke saw them go 5 points in front as Myshall’s Marian Doyle started to dominate proceedings around the middle. Cappataggle never gave up the fight and points from Michelle Skehill and Laura Creaven reduced the deficit to a goal.

Indeed the final result could have been different when Cappataggle’s Leah Treacy went through on goal, however Myshall goalie Joanne Joyce was on hand to pull off a great save.

McEvoy rises like a salmon to smash Dublin into final four