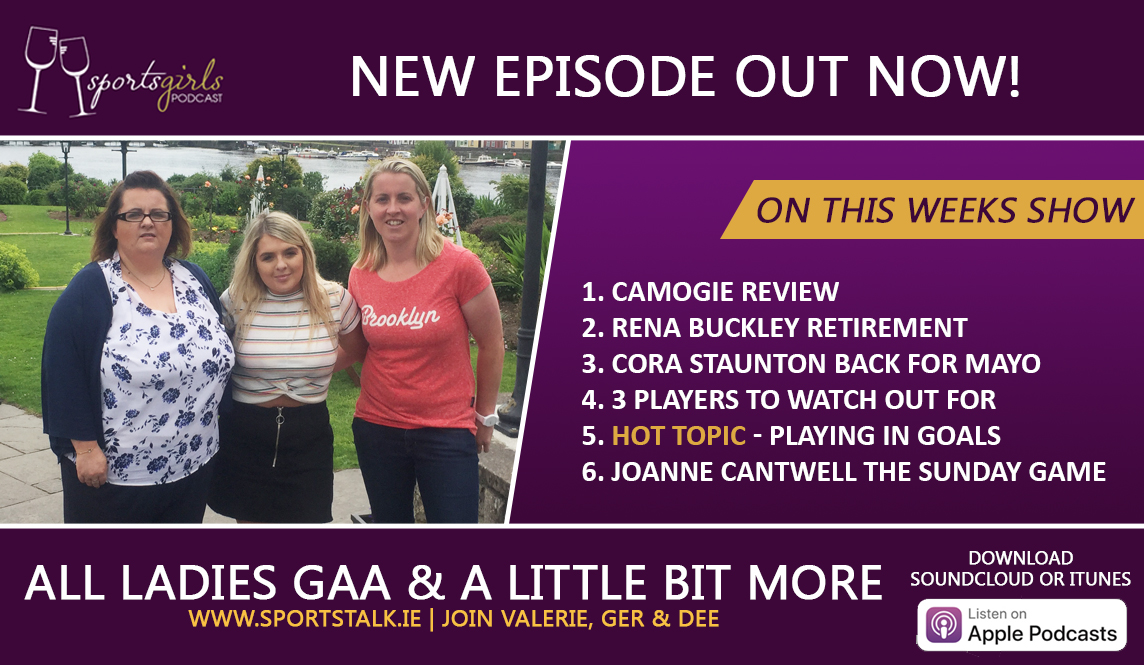 The ladies will take a look back at the opening round of the Senior Camogie Championship which saw Galway, under new management, and Kilkenny earn crucial wins in Group 1 by defeating Clare and Limerick respectively. In group 2 there were big wins for defending champions Cork and Tipperary (over newcomers Meath) while in the game of the weekend David Herity’s Dublin claimed a 3-14 to 3-09 victory over Offaly at Parnell Park.

Legandary Cork dual star Rena Buckley has recently called time on her inter-county career after winning a record 18 All-Ireland titles (11 football, 8 camogie). The only player to have achieved this feat in GAA history. The Iniscarra woman is also a 10-time All Star and is the most decorated Gaelic Games player of all time. She was also selected on the Colleges Centenary All Star team and alongside Briege Corkery was named the dual Irish sportswoman of the year for 2015.

Mayo star Cora Staunton will be returning to Ireland ahead of her side’s Connacht final clash with Galway later this month. The 36 year-old is set to line out in her 21st successive championship campaign this summer before returning to Australia in November , where she has been for the last 6 months, where she will play for a second season with the Greater Western Sydney Giants. The Carnacon woman accepted Peter Leahy’s invitation to rejoin the Mayo senior panel following their league final defeat to Dublin, and looks set to continue her record of never missing a championship game since her debut when she was just 14 years old. Staunton has won four All-Ireland titles with the westerners, has won eleven All-Star Awards, and has scored an incredible 59-483 in her career to date.

Deniese and Geraldine also name 3 players from each code to look out for during the championship. Some of the players chosen include Kilkenny’s Aoife Doyle and Mayo’s Amy Dowling.

In this week’s Hot Topic the ladies discuss women playing in goals and how it is important for young girls to be given an opportunity at playing in every position to find out what there best one is. Former Wexford camogie goalkeeper Mags D’Arcy is flying the flag for women in coaching as she has taken up a position with the Wexford senior men’s team. The four-time All-Ireland winner and two-time All-Star is now the goalkeeping coach and is a vital member in Davy Fitzgerald’s backroom team.

Finally, Joanne Cantwell is leading the way for women in the media and television industry as she will take over from Michael Lyster in 2019 to be The Sunday Game’s main presenter. Cantwell has worked her way to the top by presenting programmes which include The Saturday Game Live, rugby show Against The Head and the RTÉ Sports Awards on RTÉ television and Saturday Sport on RTÉ Radio 1.