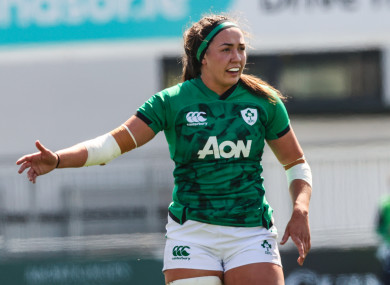 Ireland’s Head Coach Greg McWilliams has appointed Nichola Fryday as captain for the Women’s Six Nations.
The Offaly native takes over from Ciara Griffin who announced her retirement in November 2021. Griffin took over the captain’s role in January 2018.
26 year old, Fryday made her test debut against Canada in November 2016. She has made 22 appearances for her country. Fryday plays her club rugby in England with Exeter Chiefs.
Ireland’s Six Nations campaign gets underway on Saturday with a home tie against Wales.
Speaking about her appointment Fryday said: “It is the greatest honour in anyone’s sporting career to play for your country, so for me to be given the opportunity to captain Ireland is an incredible honour and I’m grateful for the chance to lead this team,” said the Offaly native.
“It is a special moment for me and my family, who have been my supporting rock throughout my career. It is a privilege to lead this group of players as we embark on a new journey with Greg and the coaching team, and we are all incredibly excited to get to work this Saturday against Wales.”
Head Coach McWilliams said: “Nichola epitomises everything about our environment – she is a brilliant person, a vocal voice within the group and a player who gives her all for the green jersey.
“She was a standout candidate for the captaincy and I was delighted to appoint her to the role.”