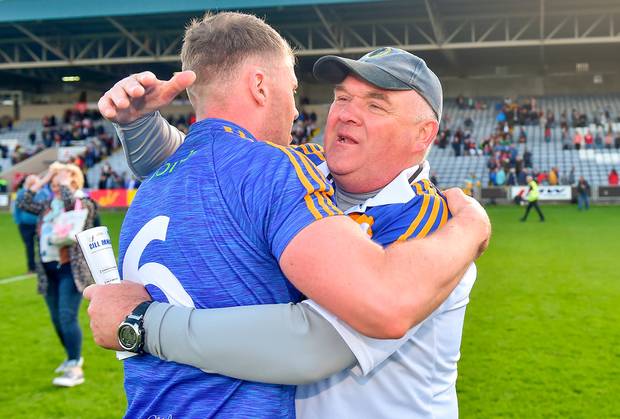 Patrick O’Connor was the star of the show scoring 1-2 from play as Wicklow came back from the dead to win by the narrowest of margins in a real ding dong battle of affairs, against a Waterford side who will be wondering how they left this game slip away from them.

The first half only produced eight scores with both teams playing attacking football but just couldn’t hit the target with Wicklow hitting nine wides but were playing into a very strong breeze. Their only score came from the boot of Darren Hayden as they trailed Waterford by 0-7 points to 0-1 at the short whistle.

Manager John Evens must have said a few stern words to this troops in the dressing room, as a new rejuvenated Wicklow team came out onto the pitch in the second half. Within minutes of re start man of the match O’ Connor hit the first of his personal tally of 1-2 from play to reduce the deficit down to five points, Anthony Mc Loughlin minutes late slotted over a free as Wicklow chipped into Waterford’s lead.

The only goal of the game came in the forty seventh minute as O’ Connor was on the receiving end of Mc Loughlin’s pass and was cool as a cucumber as he slotted the ball pass a helpless Aaron Bersford in the Waterford net.

The score of the game came from substitute Gearoid Murphy as his monstrous effort from 30 yards out, cool as you like hit it straight over the bar to edge the away team into the lead for the very first time 01-05 to 00-07. Waterford midfielder Tony Prendergast had the sides level on sixty minutes with a very well worked point assisted by Michael Curry.

As the game entered the final few moments, this was a time where your captain comes into play with Dean Healy making not just one but two vital blocks first on Jason Curry and the other on Conor Murray as Waterford came in search for the lead point.

But on the sixty fifth minute after  Theo Smith drew the fou,l up stepped Mark Jackson to send Wicklow into dream land as they were now in front with five minutes remaining. Waterford, who were reliant on Michael Curry, levelled up the scores with a free as the clocked ticked into three minutes of added time.

Wicklow were reduced to thirteen players first with Mc Loughlin picking up a back card and the second with substitute Gearoid Murphy, who had picked up a yellow card earlier on in the game, received his marching orders after he deliberate pulled down the Waterford Midfielder.  But there was time for one last throw of the dice and in the third minute of injury time from a free up steeped Mark Jackson to win the match for Wicklow to ensure that they would leave Dungarvan with the two points on the board.

On the other hand, Waterford manger Benji Whelan will be left with a few headaches as this was a match that they should have won, cruise controlling at half time, but ended up falling into pieces in the second half. Overall,on merit, Wicklow deserved their win as their never say die attitude proved enough and having finished bottom of the league last year, this must be some relief. As the old saying goes, you just cannot write scripts like this.