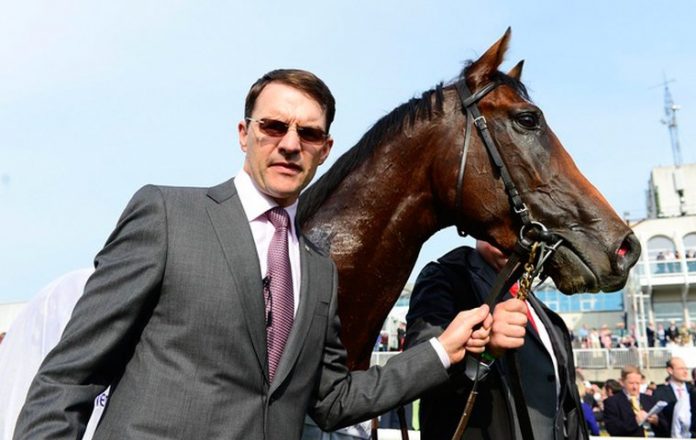 Trainer Aidan O’Brien has high hopes for Tenebrism when she steps up to a mile in the Qipco 1000 Guineas.
The Cheveley Park Stakes winner was one of a host of Classic contenders O’Brien took to work after racing at the Curragh on Saturday.
O’Brien said: “I was very happy with Tenebrism, Ryan (Moore) was very happy. He felt there’s a good chance that she could stay (a mile). We went a good gallop in front of her and she picked up and ran home.
“Hopefully she’s OK after it, but you’d have to be very impressed with what she’s done so far. The Guineas is a tough race, though. She had a little problem last year which was why her races were spaced out, but she looks very smart at the moment. I thought it was impossible what she did at Newmarket.
“At halfway I thought she was going to run bad. But she looked like she wanted every yard of that trip. We always thought Caravaggio could stay further than six.”
Tuesday is another three-year-old filly with Classic potential being a sister to Minding and she broke her maiden on Sunday at Naas.
The trainer said: “Tuesday was good and she’ll come on a good bit. She looks like a filly who will stay well – she’s relaxed and laid back and we were delighted with her.
“I think the English Guineas will be too soon for her, so it might be an Irish Guineas on the way to an Oaks, something like that. There is a trial at Leopardstown, she could go there.
“I’m thinking of going up gradually on the way to an Irish Guineas, or we could have a look at the Musidora if we weren’t doing that. We’ll see how she is.”
Of his Classic colts, O’Brien worked Point Lonsdale and Luxembourg together at the Curragh. “I was very happy with Point Lonsdale. Him and Luxembourg kind of went together and I thought the two of them went very well.
“We’re thinking the two of them can go to the Guineas at the moment. Point Lonsdale is a lovely horse, he has a great mind and when he gallops his head goes to the ground. He’s a great traveller, has plenty of pace and he’d love a nice bit of ground, even though he was racing on soft ground most of last year.
“It looks like Luxembourg will go straight to the Guineas. He travelled well in his work. The two of them finished close and it will be interesting. The two could go there and then we’ll see after that, but you’d imagine they’d have no problem stepping up (in trip).
“He’s probably bigger than (his sire) Camelot but he has the pace. Camelot is the only Montjeu to win a Guineas I think and this fellow finds it easy to go fast, which is a good sign. They could both be Derby horses,” said O’Brien.