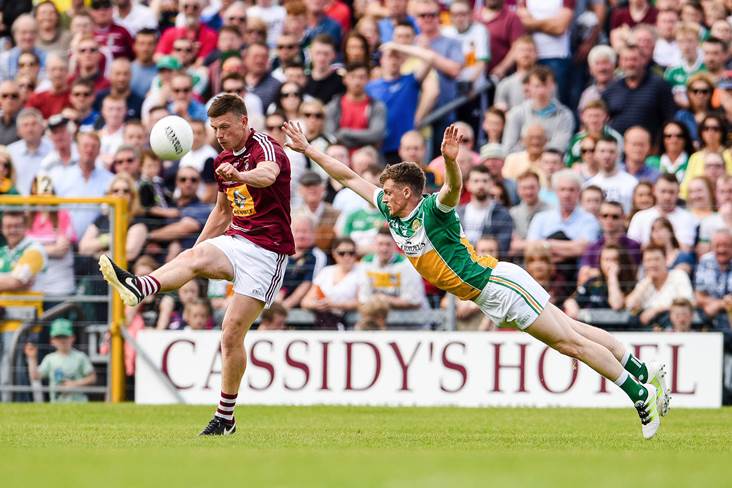 8,123 fans turned up to TEG Park Mullingar for the Lenister 1/4 Final between neighbouring rivals Westmeath and Offaly.  Offaly supporters will feel a little aggrieved with some of the 50/50 calls that went against them especially when trailing by a point a clear line ball was waved in favour of Westmeath.  Essentially they will note that Offaly were presented with fantastic chances to draw level in a game where Westmeath lead from start to finish but some poor shooting and in some cases the lack of shooting cost them.

Westmeath raced into a 4 point lead while Offaly struggled to break down a solid Westmeath defence, whom do have the experience of limiting reigning Leinster and All Ireland winners Dublin to just 6 points in the first half of last years Leinster Final.

On minute 17 Offaly opened their account with an easy 14 yard free. Their second point came from a largely isolated Bernard Allen in the full forward line leaving the score 4-2 with 20 mins gone. This is a scoreline you expect in modern day football with both teams choosing to go with the beleaguering defensive tactic.  Indeed many of the Offaly supporters were left puzzled and irate at the amount of good possessions their side had yet without a target full forward line much of these possessions came to nothing with Westmeaths defence patiently letting Offaly have possession and then striking with the sign of a weak solo or indecision to intercept and travel down the field gaining scores making it 6 to 3 on minute 29 in favour of Westmeath.

Westmeath now had their tails up and moving the ball much quicker while in possession leaving Offaly struggling to cope and dangerously trailing 9 – 3 at the break.

The consensus at half time amongst both sets of supporters was they came to see an entertaining local derby with skin and hair flying but were presented with an error ridden derby full of basic errors, no goal chances and a referee that was unsure of himself.

Westmeath again started the brightest but playing against the breeze failed to convert some good chances to leave the lead lingering and appetising for Offaly to eat away at. This indeed is what happened, Offaly with a stern half time dressing down from manager Pat Flanagan were playing for their Leinster Championship lives and with points from Nigel Dunne, Johnny Maloney and Peter Cunningham on minute 48 we had ourselves a 3 point game.

Offaly supporters began to find their voice and strangely they seemed to outnumber the home support, it would be nice to see of the 8,123 that attended how many was from either side? We were now treated to a game supporters wanted proper championship football and pace with each side trading scores almost immediately, Offaly were gaining the upper hand in midfield.

It has to be noted that in the first half when Offaly were playing defensive or “defensive shite” as one fan next us remarked, Westmeath always had an easy target from kickouts but now Offaly had pushed up and Westmeath were getting less of a success rate from going long. Surely this is the way forward for Offaly against their next opponents London in a couple of weeks time. 15 minutes to go and it was all Offaly trailing by a point and with Westmeath treading water it was setup for a fine finish.

It is amazing when the game is in the melting pot you really see which players can handle the pressure and yesterday was no different, the basics that you teach to u/8’s “bend your back, two hands in front of ball and chip the ball into your hands” , “take your points the goals will come”  “give the simple pass” all were forgotten by certain players on both teams.

The crowd were excellent from both sides in the last couple of minutes and some players melted under the pressure but fantastically we got to witness the players that stood up and blossomed in the June sunshine. For Westmeath it was Star player John Heslin, Capt. Ger Egan, the experienced Garrycastle man James Dolan and “The Bear” Kieran Martin who combined to qwell the Offaly comeback while failing gallantly Offaly’s Nigel Dunne, Midfielder Smith and ever present wing back Peter Cunningham did everything in their power to draw level with Westmeath, alas not to be and Westmeath progressed to the Leinster Semi Final in 2 weeks time on a final score of 13 to 12.

The Mayo of baseball finally have chance to rid 108 year...