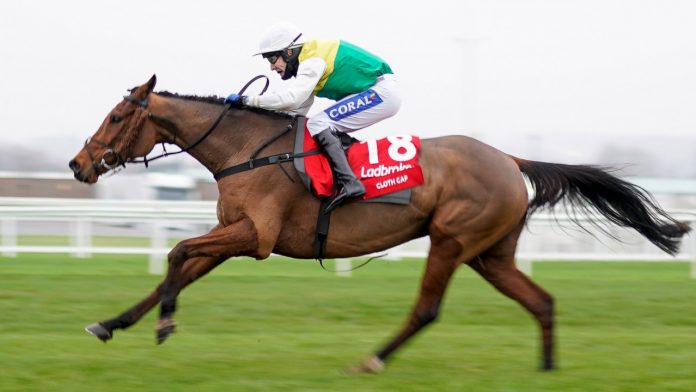 Jonjo O’Neill is confident Cloth Cap can show its true colours in next week’s Randox Grand National. A wind issue prevented last year’s favourite Cloth Cap from performing at his best.
He will be ridden by regular rider Tom Scudamore. The 10 year old is 33-1 with Betfair Sportsbook and Paddy Power.
O’Neill said: ““I’m very happy with him and he’s not done too much wrong this season – he ran well early in the season, flared up an old injury at Ascot and ran well last time at Doncaster. Tom was delighted with him at Lambourn on Thursday and he’s looking forward to riding him.
“His wind cut out in the race last year – we got that sorted straight away and I don’t see him any different to last season when he went off favourite. I’m very happy with his preparation and really positive about him. He has to have good ground – it would catch him out if it’s on the softer side.”
O’Neill who won the race back in 2010 will also run 2020 Glenfarclas Chase winner Easysland, who will be ridden by the trainer’s son Jonjo Jr.
He said: “He also had a pop over the National fences at Lambourn and I’m happy with him. He’d had problems before he joined us and I thought the Cross Country Chase had sparked him back into life as he was going great, but he just went out like a light. I can’t put my finger on it and nothing has come to light since.
“There’s nowhere else to go with him and he’s in great form so we might as well have a go – stranger things have happened.”