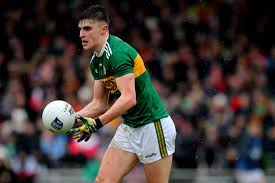 Sean O’ Shea hit 0-12 as Kerry maintained their 100% record in division one although they were forced to dig deep to edge out Mickey Graham’s side at Kingspan Breffni. Cavan had dominated the first half and led 0-11 to 0-7 by the short whistle, good value for the lead too with Mc Veety, Brady, Rehill and the impressive Conor Madden among the points, four of them coming in a pre half-time surge.

The Kingdom though, turned the tide in the second half and slowly pulled themselves back into the contest. O’Shea and Reilly landed frees before a majestic O’Shea point from play, one for Stephen O’Brien and  a fine score from play from O’Shea, levelled the match on 62 minutes.  Kerry were able to up the tempo and never looked back.  Mark Griffin, O’Shea and Paul Geaney added late points before O’Shea wrapped up his and Kerry’s account.