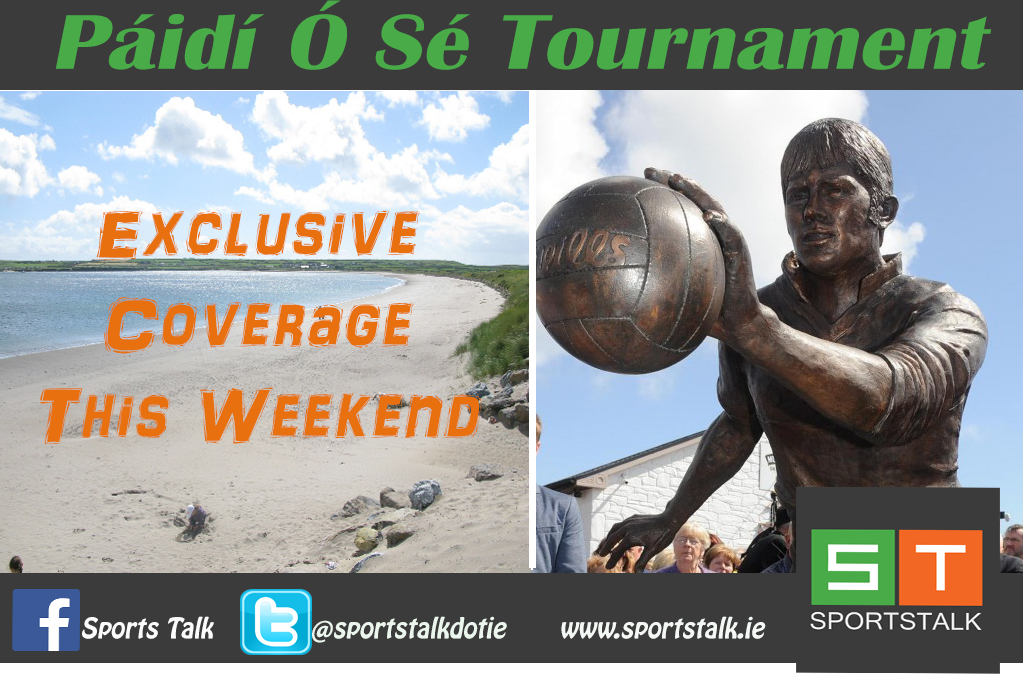 Sportstalk.ie are travelling down to the 28TH COMÓRTAS PEILE PÁIDÍ Ó SÉ today to provide exclusive coverage of this fantastic weekend of Football, Socializing and exploring of West Kerry.

For Gaelic football enthusiasts the Paidi O Se Tournament is a unique event and there is plenty to catch the eye with Kerry’s An Daingean and An Ghaeltacht with player/manager Marc Ó Sé taking part in the Dermot Earley senior men’s cup which also includes 2016 Laois county senior champions Stradbally, Kildare’s Sarsfields, Dublin’s Fingallians and 2016 Wexford senior county finalists Glynn-Barntown. The junior men’s cup will feature Dubai Celts, the first Middle East team to play in the tournament.

Kerry’s Keel, Anascaul and Lispole are up against Meath’s Dunderry, North Cork side Knocknagree and Sligo’s St. John’s in The Boars Head intermediate men’s cup and Valentia Island are flying the flag in the junior men’s cup against Cavan’s Shannon Gaels, Cork’s Ballinacurra and also the Dubai Celts.

The football festival, which is also supported by Grant Thornton, Lee Strand Milk, Fáilte Ireland and Kerry County Council Tourism Unit, has attracted over 13,000 club players since it began in 1989 and is a big boost for tourism in the area with over 1,800 bed nights created over three nights. This year, as well as nightly music and entertainment in Comórtas HQ at Páidí Ó Sé’s pub there will also be a special excerpt from a John B. Keane play hosted by the late playwright and author’s son Billy Keane on Sunday evening in the pub.

Pádraig Óg. Ó Sé promises a healthy mix of fun and sport, ‘We are thrilled to have 14 counties with plenty talent among them and and we finally have coaxed a team from the East, Dubai Celts, which was always a dream of Páidí’s. The support of local host clubs is crucial in ensuring we can maintain such a high number of teams and we thank them for their co-operation. We are delighted to bring on board our new title sponsors Lidl who are already great supporters of Gaelic Games in Ireland as well as Grant Thornton. We have over 1,000 people spending the weekend on the Dingle Peninsula, filling hotels and rental houses as well as using various other services which is great for business at a quiet time of year and long may it continue.”

Michael Collins, Area Manager, Lidl said, ”We are delighted to sponsor this year’s Comórtas Peile Páidí Ó Sé. With almost 150 stores, we are a part of communities all over Ireland, this is where serious support is born and nurtured- through the dedication of a local community. Earlier this month Lidl announced a further €1.5 million investment in Ladies Football with a commitment to spend it where it matters most – at local level and in the community so young players feel they have that backing from the start. Our sponsorship of Comórtas Peile Páidí Ó Sé is an extension of that commitment and our store teams in Dingle and Tralee are proud to get behind this year’s festival.”

It’s a real family affair for the Sheridan’s at the Paidi...