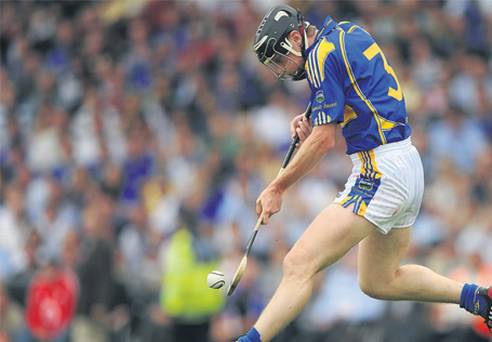 Though these finals span over a decade, under four different managers (Nicky English, Liam Sheedy, Declan Ryan and Eamonn O Shea) I would say, as a creature of habit, my own personal build up to the game was for the most part consistent – training, diet, sleep, getting the basics right! For me, the build-up would start the weekend before, at this stage the hard work is done, it’s just about fine-tuning and preparing mentally for the game.

Training preparation was different under the different managers. In 2010, Liam and the management team brought us to Carton house the weekend before the final. This was a crucial factor in our win that year. Having pipped us the previous year in 2009, Kilkenny were on a ‘drive for 5’ and expectations and hopes for a Tipperary to win were very high. Escaping to Carton House removed us from the hype, the media coverage and distraction. I remember leaving Carton House that Sunday, not just thinking we were going to win, but knowing it. No fear, attack from every position. Attack, Attack, Attack. In 2009, we left them up for air, not this year. This was our year.

The atmosphere surrounding a team in the build up to an All-Ireland final can hinge on their status as favourites or underdogs. In 2010, we were underdogs. We were raw, we were hungry. I think this is often the reason why people champion the underdog so much. There is something more, something deeper that a team need to reach for to cross the line. I think people relate to this and as players you can definitely sense this and it can give an added layer of motivation. Being favourites, some might say it ‘takes the edge off’ a team, I’m not sure if I agree with this, especially when you see Kilkenny return year after year with this same spirit and hunger.  I don’t think complacency is a good quality for any team to have. Hurling is too competitive and too unpredictable. Every match is different and every team is different, no many how many times you’ve battled in the past.

One of the best parts of the build up to the final is sharing this with family and neighbours. In my local area, people have always been very positive. Mullinahone is a great village with a great community spirit. Signs would be erected, shop windows decorated, flags and bunting on display, good luck messages in the parish newsletter and plenty of prayers and good wishes. ‘Local’ and community is the heart and souls of the GAA, it’s what it’s all about at the end of the day.

The final training session before any championship game, usually on a Thursday, would be fairly chilled. Everyone would be minding themselves, careful not to overexert or attract injury. It is tradition in the Tipp camp that the Bishop speaks to us before championship games. We normally gathered into a large huddle before training to hear some wise and spiritual words. Looking around in the huddle,  it was hard to keep a straight face at times with some of the characters on our team, as the Bishop gave his animated views as to how we should beat Kilkenny.

The day before a final, I liked to get away and relax. Before the 2010 final, myself and my wife Tracy (then girlfriend) said we’d go to Clonea Strand in Waterford for a walk. It was a cold afternoon but I took a notion to go for a swim. Tracy looked at me like I had ten heads as I ran into the freezing water but she said she knew by my determination that day, without a doubt, that we would win the All-Ireland final. The night before a final, a trip to mass was the tradition with more prayers and good wishes from the locals.

On the day of the match, we would meet together to get a bus from Portloaise. After dinner, I would take a nap, then stretch out and listen to the banter. Everyone would prepare differently, some lads watched a video and others got rubs. The bus journey to Croke Park was a great buzz, I loved watching the supporters in the Tipp gear making their way to the stadium. The atmosphere was electric, everyone there to see us play and perform. Getting the first glimpse of Croke Park gave a great sense of pride and honour to be representing your county and your family.

I always sat in the same place in the dressing room. Unlike some of the players, I never watched the minor game or pucked around in the warm-up area. It was usually just myself, Bonner and ‘Hotpoint’ Hayes in the dressing room at this point. I liked laying out my gear, flicking through the programme and having everything ready before the rest of the players came back in.

My memories of the All-Ireland games were different each year but I suppose the 2010 final remains the most vivid. I remember winning the first ball against Richie Power and feeling energised by the roar of the crowd. Some aspects of the match are very clear – Paddy Stapleton nailing Eoin Larkin with a shoulder, Brendan Cummins scoring a free from a ridiculous distance. Other crucial aspects of the game evade me. My concentration in the backs was so high, someone had to tell me that Larry had scored three goals for Tipp and also that it had rained during the match. I remember the Kilkenny goal alright, a brilliant run by Richie Power behind me. I remember the last puck out of the match by Brendan Cummins, thinking…we have it. After the final whistle blew, I took a couple of seconds to myself, just looked up to the clouds and thanked someone. Then there was absolute chaos. During the lap of honour I stayed at the back. We had been long enough trying to earn that lap, I wanted to soak it up. Returning to the dressing room, I felt pure joy and relief. Money couldn’t buy those 10/15 minutes in the dressing room after the match. I remember Brian Cody came to our dressing room to congratulate us and acknowledge us as the better team on the day.

Leaving the dressing room and meeting my girlfriend and family was a great feeling, everyone was elated for us, they had travelled the distance with us, it was their victory as much as it was ours. There was great emotion again as we entered the Burlington Hotel. I was humbled by the number of supporters waiting to greet us. Among those supporters were neighbours, aunts and uncles. It brought it back to me what hurling means to the proud people of Tipperary.  I took it easy that night, I wanted to remember it all. By midnight, I was shattered, physically and mentally.

The next morning I woke early and my girlfriend and I went for a walk in Stephens Green to get a breather and we had coffee in the park. The park was quiet and people were going about their typical Monday morning business oblivious to the events of the day before. The home-coming to Thurles train station was a stark contrast to that quiet morning walk. On a wet and dreary night, people lined the streets of Thurles and Semple Stadium in droves. The lads and I were blown away. It was particularly great to see the coaches and managers that has such an impact on us players, receive the recognition they did. It was truly a team effort.

If home-coming to Thurles was a buzz, then coming home to Mullinahone with the Liam McCarthy cup topped it all. I don’t think there will ever be another night to rival it and I don’t think any words I could use on this page could justify what it meant.

In my line of work, final or no final, schools have to be opened, teachers have to teach and children have to learn. Getting back to work is a great grounding experience and I’ve always enjoyed getting back to a routine following the summer break. Each year, returning to school marked a milestone, an end of the hurling year with Tipp. And win, lose or draw, as greedy as it might sound, you couldn’t help but think about ‘next year’. All-Ireland finals represent the pinnacle of a player’s career, the peak of a long journey. I am left with many great memories from these finals and now as a spectator and supporter I can’t help but envy the new young chaps and hope that they never take these experiences for granted. They are truly special.

Westmeath Senior Hurling Championship Preview, Clonkill on course for 3 in...