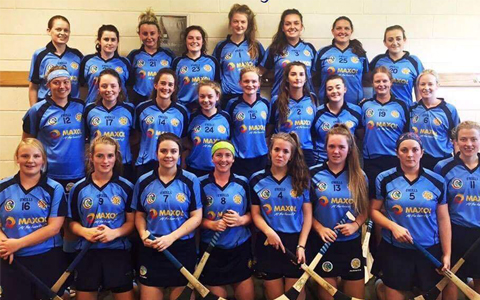 By 4pm on Sunday next January 29th we will know which two teams will be in the Intermediate All-Ireland Camogie Final. Will it be Carlow champions Myshall or Cappataggle of Galway and who will come out on top between Waterford champions Gailltír and Eglish of Tyrone?

In 2015 an article appeared online asking whether Myshall Camogie Club was the most dominant club side in Ireland as they had just gone 16 seasons unbeaten having never suffered a loss on their road to capturing the last 16 county championships. In 2016 they were once again crowned County champions and they followed this up with an impressive Leinster campaign.

In the county final they had a comfortable 1-9 to 3points win over Mount Leinster Rangers. They then defeated Glenmore of Kilkenny, O’Moores of Laois and Shrinrone of Offaly to book their place in this weekend’s All-Ireland semi-final. Having previously won the Junior club All-Ireland final in 2012 and 2013 before making the step up to the Intermediate grade, Myshall are no strangers to the big occasion. Standing in their way on Sunday is Galway Intermediate County champions Cappataggle. After winning their first Intermediate County title with a hard fought victory over Ahascragh back in September, Cappataggle will have focussed all their energy on stopping the Carlow team’s impressive run.

With a place in an All-Ireland club final at stake and the added bonus of representing your club in Croke Park on All-Ireland final day the Galway side will have left no stone unturned in their preparation for Sundays final. One of their key players is dual player Caitriona Cormican who has worn the maroon and white with distinction for both the county football and camogie team in the past. Cappataggle will look for big performances from her along with Captain Michelle Skehill if they are to be successful on Sunday. Carlow camogie had a great year in 2016 when they won the Junior All-Ireland Final with the Myshall players forming the back bone of the team. Marian Doyle, Kate Nolan and Ciara Quirke were rewarded with their performances this year for the county by being nominated for the Junior Soaring stars and on Sunday, all 3 players will look to lead from the front and continue Myshall’s winning ways.

Two clubs from opposite ends of the country will meet in Ashbourne in Meath to decide who will contest this year’s All-Ireland Intermediate final. Gailltír qualified for Sunday’s semi-final by first winning their county championship with a 2-9 to 1-06 victory over Lismore. They then defeated Blackrock in a Munster semi-final before overcoming a gallant Nenagh team from Tipperary in the Munster final. In the Munster final they needed to produce an excellent second half display to finally see off the challenge of the North Tipperary side after trailing by three points at half time. Once again their star performers were Aine Lyng and Patricia Jackman who finished with a goal and 14 points between them. And the Waterford champions needed the accurate Jackman to nail a late long range point to secure their win.

Their opposition on Sunday is Eglish of Tyrone. As Tyrone’s only senior club championship side they automatically qualified for the Ulster final this year. In 2015 they ended a 24 year long wait to capture the Ulster Intermediate title and the goal this year was always going to be to retain the title. They first had to overcome Down champions Liatroim Fontenoys which paved the way for a final meeting against Granemore of Armagh. On that occasion the Tyrone side were too strong for the Armagh champions and they put in a great team performance to record a comfortable 19 points to 6 win. Back to back Ulster titles will give Eglish lots of confidence going into Sunday’s game.

They fell at this hurdle last year against Eyrecourt of Galway and will really want to make amends this time around and give themselves the chance to play in Croke Park. Player of the match in the Ulster Final Ciara Donnelly is a key player for them and will pose the biggest threat to the Gailltír defence. Eglish will also need captain Ciara McGready and Shauna Jordan to also be in top form if they are to beat the Munster side who also have the experienced defender Sally O’Grady at centre back.