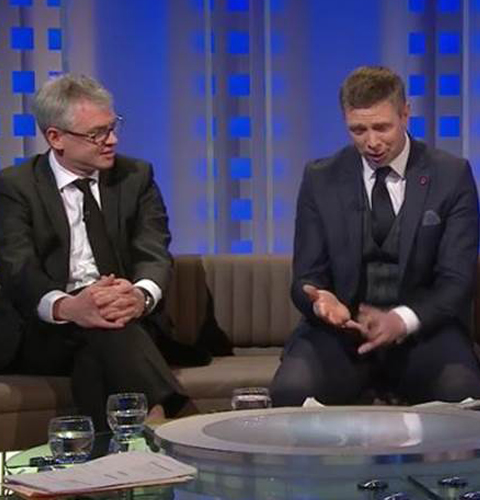 Well, it’s that time of year. The championship bus is coming into town soon and with it, The Sunday game will  be restoring itself to our screens for 90 minutes of quality action each week. As a result, a lot of Pundits who have been off our screens/radios for the last 8 months or so will be returning to our consciousness. But who will we be glad to see/hear again and who will we dread. Sportstalk.ie investigates.

1)      Michael Duignan (Offaly, RTE): Sometimes can talk too fast and get muddled while doing so, but as a co-commentator he has no peer. Has a mesmeric like ability to remember player switches during the game. Also has an almost encyclopaedic knowledge of a player’s weaknesses and strengths. Does his homework, unbiased, knows the game inside out. Hard to ask for more from an analyst.

2)      Ger Loughnane (Clare, RTE): Well I guess you can love him or loathe him, but you certainly cannot ignore him. While prone to the odd/continual outlandish statement (Tipp were certainties to win the All-Ireland last week, now they’re not even that good a team???) there’s no doubt that the pundits box is an infinitely more exciting place when the Clare man is present. His love for the game is clear, and he has a compelling way of speaking. It’s easy to see how he could have motivated a team to run through walls for him.

3)      Daithi Regan (Offaly, Newstalk) : A real no bulls**t merchant who calls it straight as it is. With Newstalk having lost their GAA rights for the summer he may be heard less on the radio which is a shame as he is one of the best around. A tough midfielder in his day loves a bit of good old fashioned “manly” hurling, and who are we to argue with that?

4)      Cyril Farrell (Galway, RTE): “Little flick, bang, over the bar… on the volley…he’s going to town on him Ger, as such…. it’s like throwing nuts to a monkey…” These words, as well as so many others are what makes Cyril so special. Speaks in a language of his own at time, inventing phrases that never occurred to anyone before…as such. Still his enthusiasm is plain to see, and is the perfect foil for Loughnane in the studio.

5)      Jamesie O’Connor (Clare, Sky Sports): Obviously coming from the Gary Neville school of analysis where everything has to be dissected in detail. That makes a welcome break from the RTE side of things which tends to deal more in generalities . If you’re looking for someone to throw verbal hand grenades, go elsewhere, but if you want a more in-depth hurling analysis, he’s your man.

Pete Finnerty (Galway, ex-RTE): A fine wing back as a player, but hasn’t been seen on the screen for the last number of years which we can be grateful for. Seemed to have an ability to talk continuously without actually ever saying much. And why was he always staring up at some imaginary point on the ceiling while speaking? The nail in the coffin came on The Sunday Game post 2010 All-Ireland final when he admitted he shouted himself “hoarse” for Tipperary in the game. “The Kilkenny folk won’t like that” interjected Des Cahill. Was never heard from since.

1: Tomas O se: (Kerry, RTE) Was a straight shooter as a player and is bringing that same ability into his punditry. A proud Kerryman, but willing to stick the boot into his old colleagues if necessary. You feel he is a traditionalist and would love a return to the old catch and kick system, but is willing enough to take modern football on its merits and is progressive enough to know that the GAA structures need to change too.

2: Jim McGuinness (Donegal, Sky Sports): Loved by some, hated by others. McGuinness will never be forgiven by footballing purists for what they see as the invention of a blanket defence system by his Donegal team this decade, but for me at least, his voice is a delight for the ears. Has an intensity and conviction in his voice that can be compelling, and as a trained psychologist, his knowledge of the mental side of the game in regards to winning can be very interesting to listen to.

3. Peter Canavan (Sky Sports, RTE) I’m not a big fan of Sky’s presenters, Brian Carney’s D4 voice in particular is a turnoff, but they have got it right with their analysts. Canavan is to football what Jamesie O’Connor is to Hurling. He provided a masterclass in analysis on how Mayo own goals in last year’s All-Ireland were not because of misfortune, but bad organization. He’s also prepared to make the “go against the grain” calls, like saying Colm Cooper should have stayed on for another year as a player. As someone who has coached an inter-county team in the recent past, you feel he speaks with more authority than others you may hear from on RTE.

4: Joe Brolly (Derry, RTE): An amazing man. Not necessarily for his opinions, which are widely contradictory at times, but for his ability to continuously talk over other people without any consideration for them. Was said by some to have “Got awful cranky since he got the kidney transplant”. Perhaps that’s being a little facetious. He was awful cranky before, and he’s getting crankier still. On saying that, when you want to see someone do a forensic attack on a team/individual he is the go to guy. His takedown of Sean Cavanagh a few years ago was glorious, pure TV gold. A barrister by day, Joe has spent his life arguing with people. That doesn’t look like it’s going to change any time soon.

5. Ciaran Whelan (Dublin, RTE): Sometimes he over talks but can be insightful at times. He is also one of the few people in Ireland to have told Joe Brolly to shut up which will have won him credit in many eyes.

Martin Carney (Mayo/Donegal, RTE): A dual county player and has never hidden his bias when speaking about either of those two counties. Why oh why then, do RTE always persist on putting him on co-commentary for Donegal/Mayo matches? Always seems to be breathlessly reporting from a war scene in Syria when commentating, when a more reasoned and impartial voice would be more welcome.

Tommy Carr (Dublin, RTE): Whenever I see that Father Ted Christmas episode where Ted asks for a particularly boring voice to speak over the intercom, I think of Tommy. Has an awful, dreary, monotonous voice god love him. Likes to introduce old fashioned words like “disco” back into the public realm while simultaneously failing to grasp any of the new fangled (ie black card) rules. Not a good look.

Mícheál Ó Muircheartaigh: (Kerry, RTE Radio) Yes we know, he’s been gone a few years now, but he’s still missed, particularly when we look at who has come since. “Sean Og O Hailpin…His mother comes from Fiji, his father comes from Fermanagh, neither a hurling stronghold… Pat Fox has it on his hurl and is motoring well now… but here comes Joe Rabbitte hot on his tail…. I’ve seen it all now, a Rabbitte chasing a Fox around Croke Park!… Teddy looks at the ball, the ball looks at Teddy…” True legendary verbal gems. Where else would you get it?

Brian Carthy (Roscommon, RTE Radio): A few years ago it was rumoured that Micky Harte wouldn’t speak to RTE as a result of their mis-treatment of his good friend Carthy. The crime? Not making Brian Carthy head commentator on the station after Mícheál Ó Muircheartaigh retirement. I’m afraid Brian, I’ll have to side with your bosses on this one. An ear-splittingly shrill voice that could cut glass and a ridiculously twee delivery makes him one of the most difficult voices to listen to on radio. Will talk for ages about something inconsequential, when all you want to hear is the score in a game and who’s winning.

Hurling Championship Preview: Westmeath to get back to winning ways