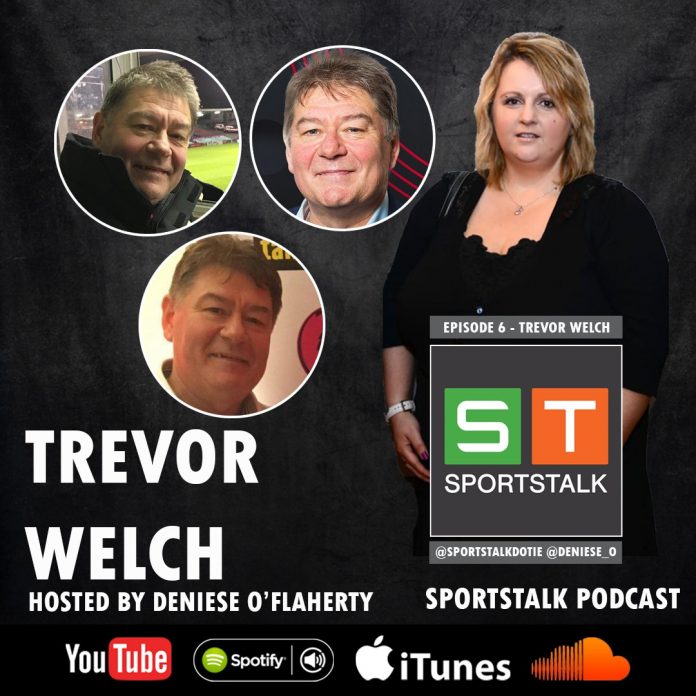 Trevor Welch is one of Ireland’s finest football commentators and presenters. He recently caught up with our own Deniese O’ Flaherty. The Corkman talks first about his good friend Pat Macaulife, whose 2nd anniversary had been recently marked. “Yes, I suppose myself and Pat came on air together really in the early to mid ’80s. I came across him when I was working on Pirate radio in Cork city. He was a big, broad stout man. He would have been involved in a lot of league of Ireland games at the time. I would have met him for the first time in 1985. We struck a chord straightaway. He would have been one of the funniest men I ever met. He had a dry sense of humour. Our relationship would last from 1985, to believe it or not the 1st of April 2019. I suppose being the funny guy he was if he was to pick anyday to go out on it would have been then. He loved all sports. He would have worked out of Cork for RTE Sport. He had great knowledge of the game and he gave so much to it. I only recently had given his grave a visit with the notepad from the Cork vs Cobh game. The 1st derby in 13 years. Pat gave so much to both clubs. Someone like him is very hard to replace. You would always have a good time when Pat was around. I remember a great story of him driving through Cobh singing Roxanne in the RTE van. He didn’t know it was connected. The police pulled him in. That was the kind of funny guy you were dealing with you know. Only Pat could do that.”

Being from that era of great radio, Trevor acknowledges his love for Cork and explains his route into the industry: “You know yourself Cork is a great city. It is very friendly. I was lucky to be around great people. Others like Noel Spillane, the great characters of Cork. All very giving of their time. It would have started for me in 1983. I was about 18 when I started. I started off in a caravan owned by Micky Daly. It was just down the road from me in Togher parish, where I grew up. My brother Noel was already on a station in the 70s on Pirate radio called the CBC. So I recorded myself on a tape and he must have liked what he heard. He gave me an opportunity. I would have been the first guy to introduce a bit of sport on a Pirate radio station. After about a year, a guy on Southcoast radio called Mick O’Brien offered me a job. It would have been a step-up because it had such a big name. I moved there in 1984 and stayed with them for a few years. Cork Multichannel tv then came along and we’re looking for a sports presenter, so I moved from radio into tv. I commentated on all sports. Boxing, Athletics and League of Ireland football. I ended up there from March ’88 for 10 years. I did all sorts of shows. Monday and Friday shows and preview and review shows. It was easy for me in a way. Cork had stars in all sports. I was blessed with the way it worked out. I made great friends and commentated on Cork City matches for 10 years. Got to travel to World Cups out of a small studio in Cork and that experience stood to me. Then that lead to me breaking into TV3 in the summer of 1998.”

Trevor Welch has experienced it all; great World Cup games, Champions League ties and some amazing FA Cup games over the years. Picking a personal highlight isn’t easy. He said: “I was commentating on top of a building in 1990 when Cork won the double; the hurling and football. The buzz down Patrick’s Street is something I will never forget. Tomás Mulcahy and Larry Tompkins were the captains. That would stand out. I also went to Moscow in 1989 when Cork played their first game in Europe. I worked on Cork City playing Bayern Munich in Musgrave Park in the UEFA Cup. That stood to me when I went into TV3. We won the rights for the champions league. I am commentating on those games for 21 years. One of my highlights, in particular, would have been commentating on a Manchester United game in Old Trafford for the first time. I am a big fan and I went from commentating as a 12-year-old boy with a broken microphone to experiencing the real deal. I fulfilled my dream in 2000 against PSV Eindhoven in a Champions :eague game. I did FA Cup finals and something like 14 European finals, the whole lot. I did GAA games for TV3. I feel very privileged to have achieved this in my career. It is sad to hear that Virgin Media have now lost the rights, but I hope to be involved in some way.”

Welch has been around all sorts of events throughout his career and recalls one interesting story from his time in commentating to date; Jose Mourinho and custard creams. “It is still on Youtube,” he laughs. “It came about when Chelsea were knocked out by Inter-Milan in 2010. Jose Mourinho came back to haunt his former side. He knew where the custard creams were in Stamford Bridge. I did a quick interview with him after the game and he was stuffing his face with them. He didn’t know we were on air. He later apologized for it. I reminded him of it a few years later and gave him a few of them on hand. It was a very funny experience and he remembered. That went viral. I brought the biscuits just in case. They are great memories to have and he lucky enough saw the funny side.”

As mentioned Trevor has been involved in European games. Preparation for these games is huge. He said: “There are loads of tools you can use. You learn as you go. Once the homework is done you’re fine. I put the meat onto the skeleton. As you know there are loads of sites available now. Pronouncing names can prove difficult. I ring up embassies. It is a useful tool. Google translate also. You pick up things. The key is to have lines and leave the game read. You don’t have to talk all the time. You still want to learn and improve.”

Being a United fan it is clear who Welch enjoyed interviewing: “Yes, Sir Alex I have interviewed him four times. I always got him on a good day. I remember one in particular when they had qualified for a Champions League final. We had a long conversation and he was in flying form. We went back through the history and what European football meant to the club. We went through the greatest players he had managed. I suppose getting to interview Ryan Giggs, Roy Keane and Paul Scholes was amazing. Other memories of the 1990 World Cup and being there I don’t think will ever be matched again. I got to work over some of the biggest moments in time. I was lucky. Some of those Irish players are now pundits and I am blessed to have the opportunity to work with them as well. The likes of Andy Townsend and Mick McCarthy. Great guys who you learn a lot from.”

Having interviewed so many amazing sportspeople over the years, Welch is clear on who he would love to have interviewed given the chance: “That is easy, Matt Busby or Bobby Charlton. They set the tone for success at United and it would have been an amazing experience to have been in their company. Muhammad Ali in his prime. In a musical sense, I would love to have maybe interviewed David Bowie. They are the dream interviews I suppose. I love music too and I grew up when U2 were getting big and seen them live in 1982. I saw them in the city hall in Cork. Only 800 people were there. I talked with Bono a few times. I love rock music The Doors and The Rolling Stones too. I was a DJ in Cork in the ’80s. I would have gone around with Trevor Stevens. We used to have to make up names at times. I wouldn’t have had the career I had without Pirate radio.”

Trevor is well known in Cork. It had its positives and negatives. He said: “When you are in the public eye you have to expect that I suppose. That is the name of the game. Most people had great respect for what you did. You have to be resilient. I am back there doing work with 96fm. We won the best sports show in 2019 and that was great. On the score on Sunday evenings, we play both music and chat sport, so it is great. Talksport is connected with us from England. I do a show on Saturday from 12-7.30. I bring my guests on. I have loads of big names on. I have a big contacts book onboard, which is great. Being a Corkman, I am hoping Cobh and Cork are in the running for promotion.”

Having a daughter has kept Welch on his toes in these times. “She is great. Hopefully, she will pick up my love for sport and music. Apart from that my work in Dublin has me kept busy. I have a love for sport and don’t know where I would be without it. I love biographies also. When I am away I always record games and go back over them. We, unfortunately, lost Finbarr O’ Shea also. He was the voice for football down here. You would miss him about. He was irreplaceable. Cork City was his life,” he said.

It is fair to say that Trevor Welch has had a huge impact on sport here and abroad and he looks forward to having many more years working at the top of his game. No better man.