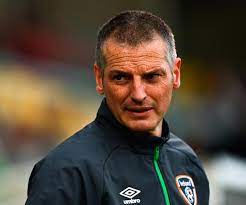 The Republic of Ireland U21 team are hoping that their good run of results over Sweden continues as they take on the Scandinavian country in Boras this evening.
Ireland have never qualified for a major tournament at this level but a win in this Group F qualifying game would leave their destiny very much in their own hands as they bid for a place at Euro 2023.
The group is tight and has been unpredictable. The group winner automatically qualifies with the runner-up entering a play-off.
Ireland have beaten Sweden three times in a row at this level, twice under Stephen Kenny in the last campaign and then that 1-0 victory at home last year. Crawford knows the home side will be out to avenge those defeats. He said: “Certainly revenge. They are a pot two team, seeded second in the group. I’m sure they probably felt hard done by in Tallaght, but I can imagine it’s going to be a high press from them. They will be aggressive, they will fancy themselves, and it will be a different type of Sweden team.
“They will make changes, with (Anthony) Elanga with the senior team, but it will be a different approach to the one we got in Tallaght. They have a new manager and I am sure he will look at the way we play, identify weaknesses that he can exploit. It’s going to be an intriguing game, that’s for sure.”

Conte Has Completely Changed Chelsea, and That Should Terrify the Rest...