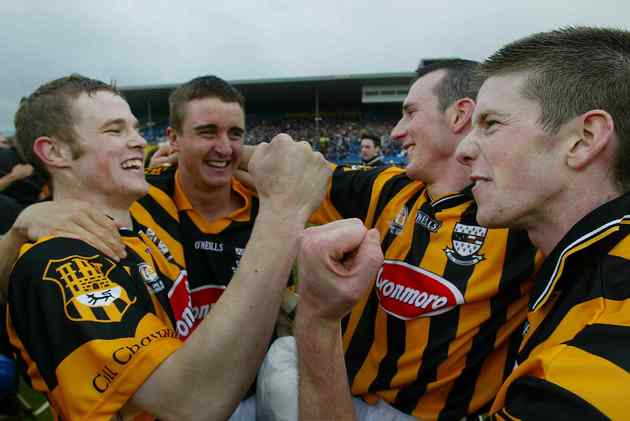 I don’t know if you heard it but Newstalk had a great interview with ex-Kilkenny hurlers Michael Rice and David Herity last Thursday night. http://www.newstalk.com/podcasts/Off_The_Ball/GAA_on_Off_The_Ball/174790/Rice__Herity_on_their_Kilkenny_days__life_after_Cody The two guys were invited on the show to talk about the NewstalkLeadership in Sport: Lessons for Business Conference on Thursday 26th January in the Intercontinental Hotel in Dublin.

Of course, the idea that the 2 lads were invited on the show just to publicize the event, was merely an elaborate ruse for the presenter to ask the question he really wanted, namely “Hey fellas, what’s Brian Cody actually like?”

Ah Cody. Never has a GAA manager stirred such intense scrutiny and curiosity. Like Russia, he’s a riddle, wrapped in a mystery, inside an enigma. For most of his inter-county career his public persona has been exceptionally bland, but it’s precisely because he’s been like that, that people assume there’s a raging volcano brewing underneath.

The fact is, any man who has been responsible for his side winning 11 All-Ireland titles in the last 18 years, would not have got to that elevated position without being somewhat ruthless. For the most part, the public don’t see that. I mean, sure, we’ve seen him rage a few times: He ranted against journalists after an All-Ireland quarter final in 2006, lashed Ger Loughnane as a “lunatic from Clare” in 2007 and blasted Barry Kelly for making a “criminal decision” in the 2014 All-Ireland final. And of course, there was THAT Marty Morrissey interview https://www.youtube.com/watch?v=JWgp-vSs7zI. But for the majority of his 19 year tenure it’s been notable how controlled his public persona has been. Basically, if you’ve seen one Brian Cody interview, you’ve seen them all “We’re up against a serious team…they have a savage intensity…it’s going to be a massive test of character”

Of course, there have been moments when Cody has let himself go on the side-line. In particular, the 2012 All-Ireland final, where he squared up to Anthony Cunningham, felt significant. And in last year’s replayed semi-final against Waterford in Thurles, Cody prowled the side-line like a predator, reacting widely to any perceived injustice against his side.

Such outbursts cause a massive media storm when they happen in public, so it must be even more revealing to see what happens behind closed doors. That’s why any titbits from inside the camp are particularly enlightening.  Usually, when a Kilkenny player is still within the county setup there, is a reluctance to speak openly about how things are going inside. Jackie Tyrrell did something like it in 2011, after the team had performed poorly in the League final, and was castigated for it. It was refreshing therefore to hear two ex-players discuss the finer points of the inner workings of the camp.

When Rice and Herity talked about the Kilkenny set up on the radio it was self-evident how much respect they have for the man. In particular Herity paid credit to the way Cody rejuvenated the set up after the 2010 All-Ireland defeat “He’s very good at that. He will have identified 4 different positions, maybe 5, that he needs to improve in the next year. He’s meticulous in his work off the field”

Michael Rice made mention of the long apprenticeship that the majority of players had to make before becoming regular members of the team. Rice himself had to wait 4 years from when he came onto the panel in 2005 to becoming a fixture in the side in 2009. While acknowledging, he would have preferred to be a first-choice starter sooner, by the time he eventually got to that level, he had 4 or 5 years of intense strength and conditioning work done, and was ready for the breakthrough. As it happens, he won an All-Ireland and an All Star in his first year as a regular.

“When you’re in that position you think I can’t make the breakthrough, I’m the only lad who can’t make it, look at Tommy, look at JJ, I should be doing that. Then you realize these guys are the exception rather than the rule”

Allied to the long initiation period Cody likes to have for his players, one of his other managerial trademarks is his mistrust of recent innovations, such as short puckouts (“If you’re going to hit it short, hit it 120 yards short” he once said to Herity). He can also be a bit skimpy on what he wants from his players tactically “He’d give you solutions but absolutely no answers. We would ask him questions like ‘Do we man-mark now against Galway in this replay or do we mark space’ He’d say ‘I think you should yeah’ We’d have to figure out ourselves what to do. But I find if you have a manager or a coach that’s giving you every ounce of instruction, when you go over the white line, you’re constantly looking at the side-line. Like, grow a pair. He left the dressing room open in such a way, that players could grow and become leaders”

Perhaps the most telling of all the comments in the interview was when Herity mentioned his final meeting with the manager, for his retirement in 2014. Even in such a setting, Cody was still inclined to keep his distance.

“I told him I wanted to meet with him. I asked ‘Will I call over to your house?’ and he said “No, I’ll meet you in a hotel” we’re not that great of friends like. I met him in the hotel. I told him I was retiring. We sat there for 2 hours reminiscing…but he never thanked me for anything, he never gave me 1 compliment, I kept thinking ‘He’s going to thank me now, he’s going to say something nice to me” The closest he got to it is when he said ‘You had a good run of things’. I was thinking ‘Yeah, but say something, give me a hug or something’”

I never automatically assumed David Herity was the touchy-feely type, but there’s something about the unique hold the manager has, that players are left begging for acceptance. Maybe one day Cody will let his inner Italian out, kiss every member of the panel on both cheeks, and declare his undying love for them. Somehow, I doubt it though.

In a way, it reminds me of what Steven Gerrard used to say about his old Liverpool manager Rafael Benitez: “I long for the day for him to tell me well done” While it would be remiss to say that the carrot is completely absent from the Cody motivational approach, you get the impression the stick constitutes a large portion of it.

Of course, one of the key things that Herity touched on in the interview was the challenge facing Cody in the upcoming year. Last year finished on a low for Kilkenny with a comprehensive defeat in an All-Ireland final. The trick now is to try and come back this year.

“History does say that he comes back even stronger every single time (Kilkenny lose) and wins two-in-a-row” Herity Said “But the huge elephant in the room is the fact that when you look at the massive successes that Kilkenny have had, the 2006-2009 team came off the back of us winning U21 in 2003 and 2004.

“They had huge success at U21 level around the turn of the decade and then the senior team drove on for the next four or five years from 2011 to 2015.

“Now that’s not the case. The U21 haven’t won a Leinster in four years, which is huge. That’s leading to the question of the conveyor belt and whether it is as strong as it once was?”

It’s a pertinent point and one I’m sure Cody (or Stone Cold Steve Austin as Herity calls him) is well aware of. Of his 19 seasons of inter-county management, 2017 will arguably be his toughest. How Kilkenny will be able to stay relevant in the coming year is a question on everyone’s lips. Regardless of how Cody does this year though, whatever he’s done so far seems to be working.