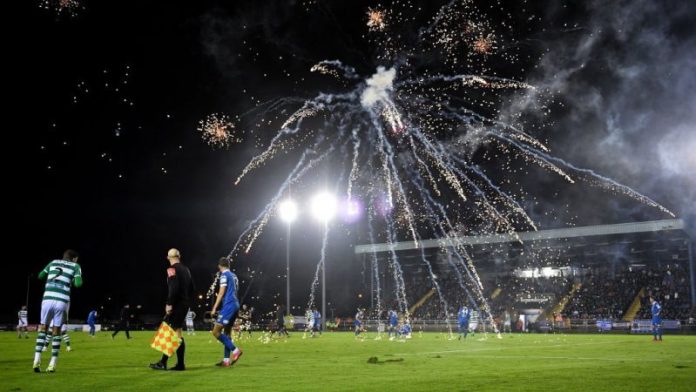 Shamrock Rovers’ opening game of the 2022 Premier Division against UCD will be played in front of a crowd after the FAI concluded their investigation into the fireworks incident that occurred during Rovers’ game away to Waterford on November the 5th.
The game at the RSC was delayed for several minutes after fireworks were thrown onto the pitch by away supporters. Waterford’s Anthony Wordsworth needed treatment after being hit.
Rovers had been punished with the game against the Students on February 18th, at Tallaght Stadium, to be played behind closed doors.
The matter was appealed and an independent Appeal Committee ruled that the original decision be set aside and a fine imposed on Shamrock Rovers be increased to €5,000.
Rovers are delighted they can begin the defence of their title in front of home supporters. A club statement read: “Shamrock Rovers FC. welcomes the decision announced today by the FAI that Shamrock Rovers will kick off the new season at Tallaght Stadium against UCD on Friday February 18th with fans in attendance.”

International King’s Cup – how it came about