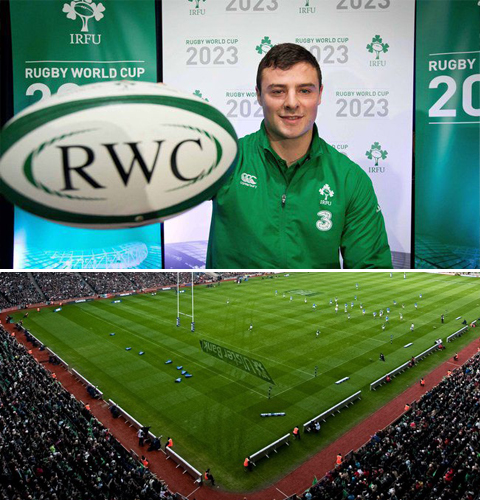 Last week, two of the country’s biggest GAA stars, Henry Shefflin and Bernard Brogan, pitched up in Croke Park to promote the Ireland Rugby World Cup bid of 2023. The World Rugby review team were taken on a guided tour of the premises, with the idea of tournament games being held in the venue including the final.

The idea of a major World cup in Ireland is certainly one that is appealing to sports fans. As a nation, we love big events, and while the cost of hosting the tournament would be substantial, it’s doubtless there would be massive interest and income generated. But would the GAA actually benefit from such a move?

The fact is we have some fine stadia in this country and the vast majority of them are GAA ones. Indeed, of the 12 grounds mentioned in the IRFU bid, 8 of them regularly host hurling and football. They include Pairc Ui Chaoimh in Cork, Nowlan Park Kilkenny, Fitzgerald Stadium Killlarney, McHale Park Castlebar, Casement Park Belfast, Pearse Stadium in Galway, Celtic Park in Derry and, of course, Croker itself. Surprisingly Semple Stadium in Thurles was not considered, apparently due to a lack of hotel facilities in the town.

Co-operation with our fellow sportsmen in this country, has never usually been plentiful. Throughout the history of the GAA there has been an intense paranoia amongst the organization of the threat posed by those dreaded “foreign sports”. For years, GAA members were prohibited from playing, or even watching games of Soccer, Rugby, Cricket and Hockey in the flesh until “The Ban” was finally lifted in 1971.

It was the same with Croke Park which was forbidden from usage by those games, until the GAA Congress in 2005 allowed international Rugby and Soccer to be played from 2007 to 2009 while Landsdowne Road/Aviva stadium was being redeveloped. The delay on the renovation of the stadium, actually meant fixtures were played until 2010 there. The arrangement was fruitful, and it included staging the Munster Leinster Heineken Cup semi-final in 2009, which at the time was the biggest ever attendance recorded at a club rugby game.

While there may be some die-hard GAA fans who would argue that the practice of opening Croke Park was detrimental to the association, the vast majority of folk would say that it was a positive move. Certainly, from a business perspective it made sense, as the rental revenue from the 4 years of having games there topped 40 million. http://www.independent.ie/sport/gaelic-football/loss-of-rental-revenue-from-soccer-and-rugby-leaves-gaa-short-26829666.html

Given the success of that arrangement there was always going to be an incentive for the organization to continue doing so. Obviously when the Aviva was finally redeveloped, the IRFU and FAI wanted to use their own stadium for games and rightly so. But still, they must recognize the superior capacity and facilities of the Jones Road ground.

When rule 42 was changed in 2005 it seemed like a logical move to myself and, if anything, I couldn’t help wondering why more grounds weren’t opened up. Consider how, when Munster Rugby were at their most successful period, the team played their home games at a 25,000 capacity Thomond Park in Limerick, while other larger grounds in Killarney, Thurles and Cork went unused. And it’s not just the fact that the grounds are not being used, but the matter of letting training facilities to other organizations is also not permitted. In doing so, valuable income to clubs all around the country is lost.

The argument of not letting other sports be played in GAA venues always goes along the lines of “We’d be giving them an advantage” but such thinking is so insecure and short sighted. Talented sportsmen play Rugby and Soccer for any different number of reasons. One of them relates to their interest level in the sport. They may just prefer playing those games to GAA or are following in a family/area tradition. Another is the fact that with those sports there is an opportunity to play at a professional level. A third pertinent reason relates to the fact that these sports have defined playing seasons, in contrast with the GAA’s higgedly piggedly schedule.

And it’s not as if the GAA hadn’t allowed other sports to be played at the ground. In the past, we’ve had baseball demonstrations, Muhammed Ali boxing, American football, compromised rules…Did the GAA not think when they were doing so that they were handing those sports an advantage? Certainly, when you think of the amount of GAA players who have been lost to Australian Rules, you could argue letting that sport be played here was much more harmful than a few rugby and soccer internationals.

There is plenty of money to be made from leasing out our venues to other games, the same as it for concerts, and thankfully Pauric Duffy and others in the organization are smart enough to realize that. Once the money generated is invested widely in helping struggling clubs, ground renovation, and club and county players welfare, then I really don’t see how there should be a problem.

One issue that may prove thorny if Croke Park is to be used as a venue for the World Cup is the Hill 16 end. The familiar “Dublin Only” terrace, definitely has sentimental and historic significance (although the theory that it was built from the rubble of the 1916 Easter rising has been disproved as nonsense) and I can understand why fans would like to see it remain as is, but there’s no escaping the fact it’s a bit of an eyesore compared to the rest of the ground. Would World Rugby be willing to allow Ireland host a Rugby World Cup final in a non all-seater stadium?

In contrast, I think all other grounds around the country would welcome the necessary stadium renovations that a big competition would bring. Sure, there would be a slight inconvenience as regards rescheduling GAA fixtures at some grounds during this time, (what’s new?) but I’m certain if you offered say, the Mayo county board, a massive improvement on their stadium in exchange for one month of sporting inconvenience, they would be more than willing to accept.

In summation, to me, there’s no serious opposition argument. There’s one big reason (Money) why the GAA should let their grounds be used for the Rugby World Cup bid, and just a few minor concerns as to why we shouldn’t. A rugby world cup would be a massive boon for business, the GAA and Ireland in general. The vote takes place in November. Let’s hope we get it.

Dublin LGFA star Nicole Owens gives us her thoughts after a...