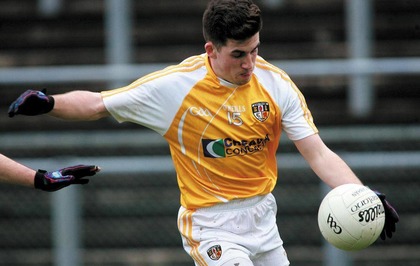 Ryan Murry was the star of the show with a personal tally of 1-4, and after four attempts Antrim have finally got their first league points on the board.

After the disappointment of three consecutive defeats on the bounce, and despite having Paddy Mc Bride sent off for two bookable offences, the Glensmen proved to be too good for a battling London side who kept fighting away to the final whistle.

This was a game that could have went either way as London got off to a great start when David Dunne stuck the ball into the back of the net in the third minute.  But Antrim soon fond their groove and with points from Patrick Mc Bride, Ryan Murry and Martin Johnston the sides were level. The crucial score of the game came seven minutes before half time, when man of the match Ryan Murry goaled from the penalty spot, as Antrim lead at the break 01-06 to 01-02.

The second half was very nip and tuck and further scores from Ryan Murry and Matthew Fitzpatrick kept London at bay. The final nail in the coffin came from Ruairi McCann as Antrim ran out five-point winners.

All the midweek GAA results

Exiles send Wexicans flying back with tail between their legs