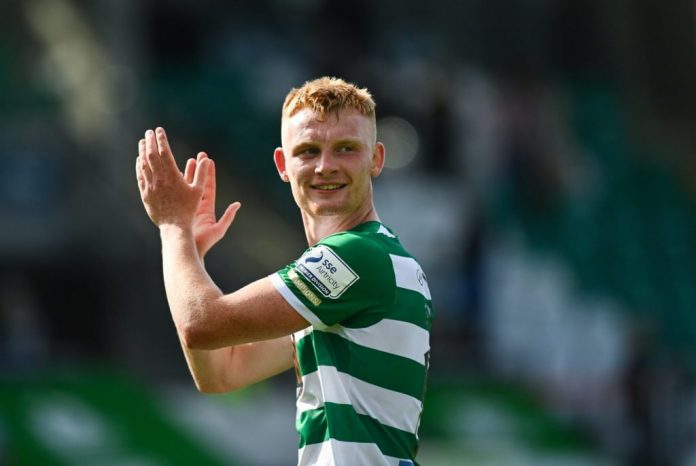 Liam Scales has spoken about his delight at scoring his first goal at Celtic Park as Celtic defeated Raith Rovers 4-0 in Scottish Cup on Sunday.
The full-back opened the scoring for the Hoops with a stunning strike in the 22nd minute. Speaking about the goal he said: “It’s up there with my top two or three but the fact it’s my first at Celtic Park makes it special.The role is different to what most left backs; what we do. I think it allows you to get into more advanced positions than usual left or right backs would. It’s something different and I really enjoy it. The manager wants his full backs to show in pockets on the inside because it gives the opposition something to think about.
Scales, who joined Celtic from Shamrock Rovers last August, has done well when given a chance by manager Ange Postecoglou. He admitted the Australian’s style of play is something has had to get used to: “I’ve had to learn it as I’ve never played in that system before here, but we do a lot of work on it. You can see as the season has gone on, all the full backs have taken to it. Sometimes you end up in positions attacking midfielders turn up and I got the chance to shoot out there. I sometimes do it in training but not all the time – that was good!”
Yesterday’s win means Celtic are in the hat for tonight’s quarter-final draw. They now prepare for a Europe Conference League tie with Bodo/Glimt on Thursday night. The Wicklow lad said: “ We need to prepare for Bodo as they will be a different challenge with a different style than we’re used to. We’ll do our work on them.”
Scales hopes to be part of the squad for their European tie but knows the competition for places is fierce. He said: “There is strength in depth, you could see that from the players who came off the bench. It does keep the morale high across the squad because everyone knows they will eventually get their chance. We do a lot of work in training to keep everyone sharp and match ready.”

Kelly eyeing up a return to league action