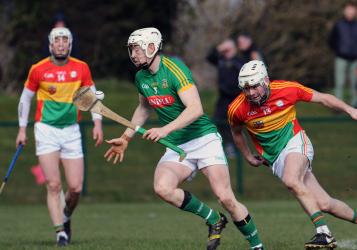 Carlow returned to winning ways in the Joe McDonagh Cup with a 0-21 to 1-14 win over Meath at Netwatch Cullen Park.

Denis Murphy and Chris Nolan provided the bulk of the hosts tally, with Marty Kavanagh still absent for the Barrowsiders, who were also without Richard Coady through suspension.

Murphy claimed eight points from frees, while Nolan added six points in a game where the sides were tied at 0-16 to 1-13 after 59 minutes, before Carlow put in a strong finish.

Earlier, nothing separated the sides either at the half-time break – deadlocked at 0-11 to 1-8, with a 32nd minute goal from Patrick Conneely bringing the Royals back into contention, after falling 0-10 to 0-7 in arrears.

Conneely finished top-scorer in this contest with 1-7, including six points from placed balls.

Carlow began the second half brightly with scores from Edward Byrne and Murphy, while Adam Douglas replied for Meath.

A superb Adam Gannon point levelled the tie on 50 minutes, while a Gavin McGowan effort from play edged Meath in front for the first time.

A trio of unanswered scores settled Carlow with Nolan on fire.

A Conneely effort cut the gap, but a late long range point from David English ensured a four-point margin at the full-time whistle.